Minecarts have appeared in the series as obstacles and rides.

In this game, minecarts appear in Koala Kong's boss fight, and in the Nitrus Brio bonus rounds.

Minecarts appear in the track Dragon Mines where they will squish a racer's kart and make it spin around if they hit them.

Crash Bandicoot: The Wrath Of Cortex

Crash rides a minecart in Compactor Reactor to get to one of Cortex's labs. It is later used again in a race against Crunch in Ghost Town who is also in a minecart. In this game Crash can make the minecart go left and right by leaning in a certain direction, and can press up or down to accelerate or decelerate.﻿

Minecarts reappear in the N. Sane Trilogy remaster of the first game where they reprise the same role they had in the original version of the game. In addition, one of the minecarts carries Koala Kong away upon his defeat, as opposed to collapsing.

Minecarts as they appear in Crash Bandicoot.

Minecarts as they appear in Crash Team Racing. 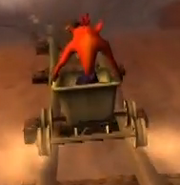 A Minecart in The Wrath of Cortex.

Retrieved from "https://crashbandicoot.fandom.com/wiki/Minecart?oldid=172451"
Community content is available under CC-BY-SA unless otherwise noted.