The Unnamed Middle Island is the middle island between N. Sanity Island and Cortex Island in Crash's archipelago, the Wumpa Islands.

A giant tree is located at the top of the island, but there are also other features, such as a large volcano (where the Koala Kong boss fight is situated in the first Crash Bandicoot game), ancient ruins, several bridges, massive volcano all where Ripper Roo fought as well as levels like The Lost City, Temple Ruins, Road to Nowhere, and Sunset Vista, a river (Up the Creek), jungles, and the Uka Uka's prison, where Uka Uka was incarcerated until the events of Crash Bandicoot 3: Warped.

During Crash Bandicoot’s quest to save his girlfriend Tawna from Dr. Cortex, he was forced to fight two of Cortex's henchmen on Middle Island. One was Ripper Roo, who was hopping around at a large waterfall, and the second was Koala Kong, who was waiting in the island’s mines. Crash was able to defeat both goons before making his way to Cortex Island.

When Dr. Cortex attempted to conquer the world using his Cortex Vortex space station, Middle Island was experiencing frigid weather and became completely covered with snow. Polar bears had managed to migrated there during this time and Crash later adopted one named Polar while searching for Crystals. Eventually, after Dr. N. Brio’s laser destroyed Cortex's space station, a chunk of the station that came crashing down onto the temple Uka Uka was imprisoned in, resulting in his freedom.

In Crash Bandicoot: The Wrath of Cortex, Aku Aku and Pura are seen relaxing on the beach of Middle Island (probably), when a huge tsunami washes Crash and Coco onto the shore as the volcano erupts and thunder clouds appear in the sky. Aku Aku then leaves to confront Uka Uka on the matter. 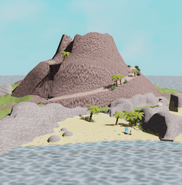 Probably the Island seen in Crash Bandicoot: The Wrath of Cortex.

Concept Art of the islands. Contains the Pyro Island
Add a photo to this gallery

Koala Kong's mine
Add a photo to this gallery

Retrieved from "https://crashbandicoot.fandom.com/wiki/Middle_Island?oldid=184447"
Community content is available under CC-BY-SA unless otherwise noted.