Meteor Gorge is the first race course of Barin and the fourth race track of the adventure mode in Crash Nitro Kart. It is always snowing in this track, however there is lava underneath the ground as shown when a racer misses a jump. The ice on the track will make the racers go faster, while the ice on the sides will make them go slower. It is used in the Wumpa Cup and the Red Gem Cup (along with Inferno Island and Assembly Lane).

There is a shortcut near the end of the lap. In order to do this, the racer must jump to the left of the main path, onto a platform in the middle of a lava pit, and then back onto the main path. This is the location of the letter K in the CNK Challenge (R in the Nitro-Fueled remake). Strangely, the next track is already available when Barin is first loaded, meaning that players have the option to complete the next track and then do this one.

This track returned in Crash Team Racing Nitro-Fueled, where it went through a visual redesign, with a more rocky, ashy look to make it look more unique compared to other snowy tracks. There are also now citizens of Barin populating the sides of the track, spectating the race. 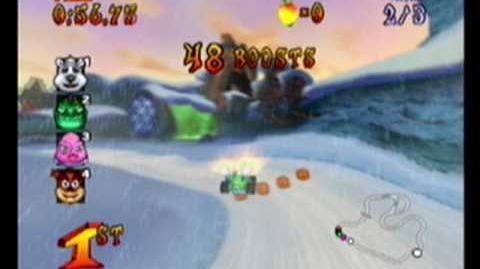 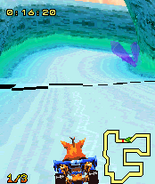 Meteor Gorge in the N-Gage version of Crash Nitro Kart 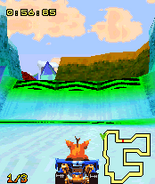 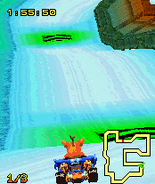 Citizens of Barin spectating the race