I've been waiting for this!

Megumi is named after Megumi Hosoya who was the product manager and marketing manager for Sony Computer Entertainment Japan for the first three Crash games. According to the old Naughty Dog website: "Megumi Hosoya, marketing genius, created the Crash Dance for Crash 1's TV ads in Japan. The success of that campaign influenced Naughty Dog to incorporate the dance into Crash 2 and Warped." The other trophy girls are also named after people involved in the Naughty Dog games.

In Crash Team Racing, Megumi is one of the four Trophy Girls alongside Ami, Liz and Isabella. They are in charge of handing out trophies to the winners at the end of races. Megumi gives trophies to Cortex and N. Gin. The epilogue of the game states that she unveiled a new line of perfume called "Eau De 'Coot", featuring the alluring scent of fermenting wumpa fruit.

Megumi was added to the game as a playable racer in the Nitro Tour Grand Prix. She is an Acceleration class racer.

Although little of her character is explored, Megumi's most visible trait is her unrestrained sense of excitement, which clashes with her otherwise courteous personality. Out of all the Nitro Squad members, Megumi is the least aggressive, and seems soley focused on enjoying herself and her friends rather than claiming victory. Unlike the rest of the Nitro Squad members, Megumi doesn't take losing too seriously as she doesn't care about her loss and can be seen clapping and congratulating the winner on the winning podium. She is also the only character who shows good sportmanship whenever she loses on the winning podium except for Geary. She's also can be clumsy, as unlike the other Nitro Squad members in their space suits, she's the only one who shoots her laser gun without any skill or safety, unleashing a huge beam at a random direction instead.

Megumi has sky blue hair and tail, along with orange eyes. Her attire resembles that of a doctor's, comprising of a sleeveless white lab coat, white pants and black sneakers, thus being somewhat of a female version of the Lab Assistants' outfits. She is often seen carrying a large white and sky blue striped umbrella.

Megumi has the least altered appearance in CTR Nitro-Fueled, the only changes being her fur is lighter, her cheeks are chubbier, her sneakers are now dark gray and her left ear has a piercing.

Megumi as she appears in CTR.
Add a photo to this gallery 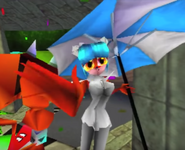 Megumi's head in CTR.
Add a photo to this gallery

Megumi in her kart in Crash Team Racing: Nitro-Fueled.