Drive-thru Danger
Megamix Mania is a race course in Crash Team Racing Nitro-Fueled that was released on January 16th, 2020 for the Rustland Grand Prix. It is a post-apocalyptic themed track, and is one of the tracks featured in the Desert Cup.

The track is set in a chaotic and hazardous environment after the end of the world, with the appearance of a dried up reef. Chaos and anarchy reign, with a desecrated landscape filled with graffiti, pollution and destruction. This forsaken track is populated only by bright green scorpions on the sides of the track.

A lap starts just before a section of the old Roo's Tubes track before heading towards N. Gin's battleship. Get the blue fire from a boost pad here and keep it for a big shortcut within the ship later on. Just after the blue fire pad is a small shortcut, however. Hop off the ramp to the right and go through the shipping container, cutting a corner. Avoid the rotating fan blades and enter the ship.

Go over a few ramps and boost pads in the ship and make a sharp turn to the left. Go over the ramp and make yet another hard left, go to the left yet again with a relatively gentle curve, and exit the ship. Alternatively, if you kept blue fire from earlier, you can jump to the left after the first sharp turn and land on a small piece of track, cutting straight to the ship's exit.

After exiting the ship, you come out at a missile bay and drop down onto another part of Roo's Tubes. This breaks off into a reef bed with multiple pathways before linking back up at the starting line. Littered throughout the track are multiple paint mines which cause you to spin out if hit.

Rusty Walrus's cameo on the track 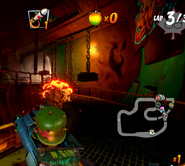 Concept art of various set pieces from around the track

Concept art of the graffiti art seen around the track

Concept art of the finish line

Concept art of N. Gin's battleship as seen on the track