Bandipedia
Register
Don't have an account?
Sign In
Advertisement
in: Crash: Mind Over Mutant, Titans, Crash of the Titans,
and 2 more
English

This hard-shelled enemy's skin is strong enough to ignore fire and lava! In fact, I think he kinda likes it!

The Magmadon Hero holds one of Uka Uka's bones in Mind Over Mutant. It is fought at the Ice Prison.

Magmadon is a bipedal turtle-like mutant whose skin and spiky shell are made of hardened magma. It has a flat head with small eyes, a sharp beak, and a wide mouth. It also has scales on its belly. Magmadon is often found hibernating, which makes its body even harder. It attacks with its fiery, explosive hands, and its shell by smashing it to the ground. When Magmadon stomps the ground, the arena shakes, causing tremors. Magmadons also attack by summoning craters, and can cross pools of lava or boiling water without trouble. According to Aku Aku, Magmadons like these hostile environments.

Slam Thrust: Magmadon heats its fists, causing them to glow. It then pounds the enemy with a burning fist, and, on the second strike, punches them with the other hand. Afterwards, Magmadon is grounded and takes time to get up again. In Crash of the Titans, the second strike breaks the block of most other titans.

Body Slam/Heavy Attack: In Crash of the Titans, Magmadon's heavy attack is a body-slam that, while powerful, has a long recovery period, during which Magmadon is vulnerable. In Mind Over Mutant, it is instead a combo move performed by pressing the 'light attack' button while jumping, and no longer breaks an enemy's block.

Punch/Heavy Attack: Exclusive to Mind Over Mutant. Magmadon throws a hook punch at an opponent, breaking their guard.

Hellfire Stomp: Magmadon's ultimate attack. It stomps the ground and summons a line of volcanic craters in front of itself, racking up massive damage on everything it touches. In Mind Over Mutant, the Magmadon Hero can create three lines of fire instead of one.

Breakdance Raid: A combo attack available only in Crash: Mind Over Mutant, performed by pressing the 'light attack' button while blocking. Magmadon lies on the ground and spins around the arena as if breakdancing, damaging anything it touches. During this time, it is invulnerable to most attacks (excluding Ratcicle's Freeze Punks and damage from TNT crates). Magmadon can reset its trajectory by holding the 'light attack' button during the Raid. The attack ends after eight seconds, or after pressing the block button again.

Block: Magmadon guards itself from attack with its forearm.

Promotional trading card of the Magmadon for Crash of the Titans. 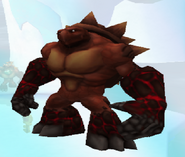 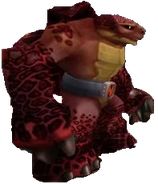