Sledgehammer
Lumberjack Lab Assistants are a variant of lab assistants only found in Crash Bandicoot 2: Cortex Strikes Back and in the N. Sane Trilogy remaster of the second game.

They are dressed up as lumberjacks and wield a large sledgehammer, used to slam the ground in an attempt to hit Crash or Coco.

They follow the player left and right and walk up to them before hitting the ground with the hammer when the player is close enough. They can be defeated with any attack and, when attacked, Crash/Coco will disappear underground before a tombstone with their face on the front pops out of the ground. They are also the only enemies that can defeat the player even when they are underground.

In Nitro Fueled, it appears as a skin. However, the color of its cap, shirt, and jeans are inverted, and its shoes are black.

They only appear in the levels Diggin' It and Bee-Having. 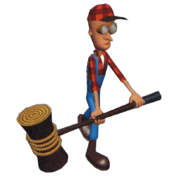 Artwork of a Lumberjack Lab Assistant from Crash Bandicoot 2: Cortex Strikes Back 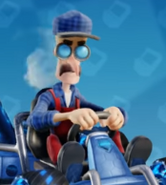 Retrieved from "https://crashbandicoot.fandom.com/wiki/Lumberjack_Lab_Assistant?oldid=191996"
Community content is available under CC-BY-SA unless otherwise noted.