Bandipedia
Register
Don't have an account?
Sign In
Advertisement
in: Crash Bandicoot: On the Run!, Levels, Ruins Levels

You may be looking for this level's namesake from Crash Bandicoot.

Question: Can something be really lost when Crash has already spun through it before? That said, he probably wouldn't remember, so don't get sloppy — you'll find plenty of danger here.

The gem run for Lost City simply requires the player to reach the end, with the help of the use of boom berries. The prize for this is a red gem. After the gem has been earned, the challenge can be re-attempted once every 24 hours for two purple crystals.

The challenge run for Lost City requires the player to break all 73 crates, with the reward being 10 Shell Shards.

Names In Other Lanuages 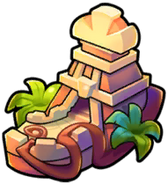 A concept map (reduced version) of the level Lost City in Crash Bandicoot: On the Run!.

A concept map of the level Lost City with all collectible items in Crash Bandicoot: On the Run!.