Hostile
Lizards are enemies that appear in the Crash Bandicoot series.

They walk and jump on two legs and have a frill made out of skin around their necks, a distinctive characteristic of the chlamydosaurus kingii frilled-neck lizard.

In Crash Bandicoot 2: Cortex Strikes Back, some of the lizards were modified and turned into cyborgs.

They re-appear in Crash Bandicoot: The Huge Adventure, this time with a completely different look, reminiscent of the cyborg variant, but entirely organic.

In the first game, they can be encountered in the ancient city ruins and can be seen hopping from a spot to another making enormous leaps. The only difference between the two variants is the fact that the red variant is much faster than the green variant. They can only be defeated by jumping on them.

In Crash Bandicoot: The Huge Adventure, they walk around back and forth and can only be defeated by a slide attack.

Concept art for the lizard by Charles Zembillas 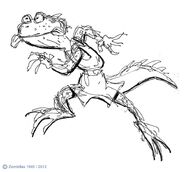 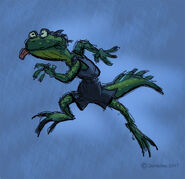 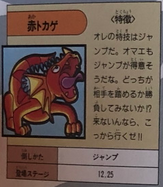 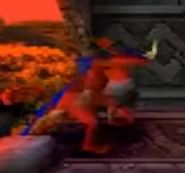 A lizard in Crash Bandicoot N. Sane Trilogy
Add a photo to this gallery
Retrieved from "https://crashbandicoot.fandom.com/wiki/Lizard?oldid=199327"
Community content is available under CC-BY-SA unless otherwise noted.