Liz (known in Japan as エリザベス Erizabesu) is a female bandicoot responsible for handing out prizes to Polar and Pura in Crash Team Racing and a playable character in Crash Team Racing Nitro-Fueled, speaking with a British accent in the latter. Liz is named after Elizabeth (Liz) Ashford, who was the PR Manager for Sony Computer Entertainment Europe at the time. The other trophy girls are also named after people involved in the Naughty Dog games.

In Crash Team Racing, Liz is one of the Trophy Girls along with Ami, Megumi and Isabella, who are in charge of handing out trophies to the winners at the end of races. Liz gives trophies to Polar and Pura. The epilogue of the game states that she posed for Bandiboy Magazine, buying her dream Malibu mansion with the earnings.

Liz was added to the game as a playable racer in the Nitro Tour Grand Prix. She is a Turning class racer.

Although little of her personality is explored, Liz is implied to be hungry for fame and fortune. Her general attitude implies she has no interest in actually winning a race as much as basking in the attention victory would bring.

Liz has black hair and a black tail, blue eye shadow, and purple eyes. Her attire consists of a light green tankini, a short purple skirt, and purple sneakers. She is often seen carrying a large green and purple-striped umbrella.

In CTR Nitro-Fueled, Liz now has purple highlights in her hair, lighter fur and wears purple eyeshadow and lipstick. Her clothing is now altered as well: her top is now a darker green with purple straps, her skirt and sneakers are now a dark purple with her skirt gaining white stripes and she now wears dark purple capri leggings under her skirt. Her left ear also has two piercings.

In Nitro-Fueled, Liz joins a racing team formed by Tawna known as the "Nitro Squad" along with fellow former trophy girls Ami, Megumi, and Isabella. They were all introduced as playable together in the Nitro Tour Grand Prix, and are often seen racing together in promotional images, implying friendship and camaraderie amongst the group.

Promotional image of the Trophy Girls with Crash Bandicoot in CTR.
Add a photo to this gallery 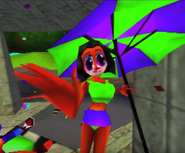 Liz in her default outfit.

Nitro Pirate concept art.
Add a photo to this gallery

Retrieved from "https://crashbandicoot.fandom.com/wiki/Liz?oldid=191433"
Community content is available under CC-BY-SA unless otherwise noted.