Lions are seen in Crash Bandicoot 3: Warped and the N. Sane Trilogy remaster of the third game, where they are enemies in Tiny Tiger's boss fight. Whenever Tiny gets hit, he will jump up back to the top of the coliseum, and start roaring. Lions then come out of the doors in the Rome coliseum, and try to eat Crash. Lions also appear in the Nitro-Fueled remaster of Crash Team Racing in the race track Papu's Pyramid.

They come out of random doors, regardless of where Crash is standing. Lions aren't seen in any other games. Crash can defeat them by jumping on or spinning them or by using the Fruit Bazooka after defeating Doctor N. Gin. He can also avoid them by standing at the very edge of the left side of the coliseum. He may have to jump, though, if he isn't at the right position because if he doesn't have to spin them, the lions disappear before Tiny can continue to jump and tries to squash Crash Bandicoot.

A Lion in the strategy guide of the Japanese version of Crash Bandicoot 3: Warped.

A Lion in Warped.

Some Lions in Warped.

A Lion in Warped.

The unused Lion enemy in the level Gold Rush from Crash Bandicoot: The Wrath of Cortex.

A Lion in The Wrath of Cortex. 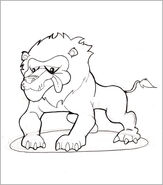 Concept art of a Lion in Crash Twinsanity.

Retrieved from "https://crashbandicoot.fandom.com/wiki/Lion?oldid=185354"
Community content is available under CC-BY-SA unless otherwise noted.