The Komodo Brothers are the second bosses in Crash Bandicoot 2: Cortex Strikes Back and they both have three hit points. In the beginning, they're throwing swords at each other and catching them. They spot Crash and Moe chuckles, jumps into the middle, and spins Joe, who ends up spinning around the room, but he stops, stunned. You can spin or slide kick him and he'll knock Moe over. Infuriated, Moe starts throwing swords around the room going counterclockwise. Then he'll spin Joe again. Once you make him hit Moe they'll be left with one hit point. Moe throws swords around the room again. When he spins Joe for a final time, Moe will throw a single sword at you. When Joe knocks Moe over, he won't get up. You win and you'll move on to the third warp room. 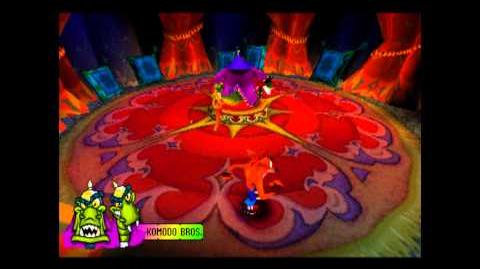 Only Komodo Joe appears in Crash Team Racing, where he is the third boss race. You race him in the track Dragon Mines. During the race, Joe will throw TNT crates which explode as soon as they hit the floor as well as laying down the occasional Nitro crate. The easiest way to beat him is to hit him near the rail tracks to increase the chances of a mine cart squashing him. 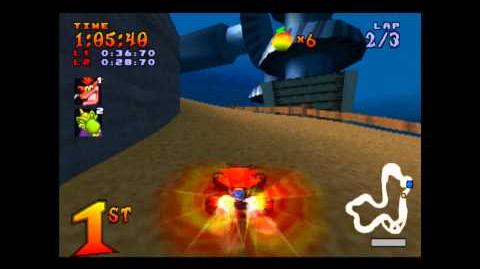 Big Bad Fox is the name of the Komodo Brothers' boss fight in Crash Bash. It is the third boss fight in the game. To enter this boss fight, the player must have at least 15 trophies, 10 gems, and 7 crystals. On the first round, the brothers are riding a large war post that's divided into 3 stages. The player's tank will be equipped with bombs.

Phase 2: Consists of 4 turrets that shoot blasts of green energy.

Phase 3: Summons 2 missile launches on each side of the warship that follow the players movements, until they shoot the missile.

On the second round, after their engine is blown up, they will fight to the death with their tanks and the player's tank will be equipped with an infinite amount of missiles. 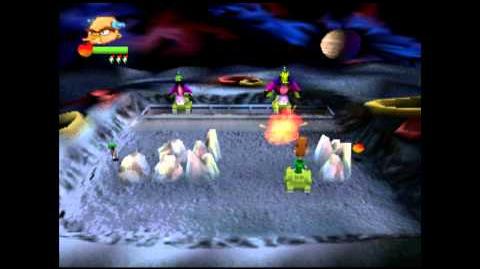 In the N. Sane Trilogy remake, their boss fight is the same as it is in the original version with a few minor differences. If you walk up to Moe at any time and touch him Crash will bounce back, if you jump on Joe while he is dizzy you will also bounce back as well. Also when you spin Joe instead of spinning back and colliding with Moe, he rolls back and then collides with Moe. Lastly instead of the swords that Moe throws disappearing right away, they they stay on the ground for a few seconds, and they even hurt Crash if he touches them when they are on the ground before turning into red sparks and disappearing.

Like in Crash Team Racing, only Komodo Joe appears, and is fought the same as in the original.

As the player waits outside of his boss portal, a chicken is seen in front of Joe's kart. As Joe begins taunting the player as an ominous voice at first, he then throws two throwing knives to the left and right of the chicken, which scares the chicken away, in which Joe then appears physically in front of the player. Joe then grabs both of his throwing knives, flips over his kart, and proceeds to sharpen one of his throwing knives by grinding it on one of the front wheels. He then kicks his kart back into position before hopping into his kart and driving off into his boss portal. Upon defeating Joe, he drives up to the player, admitting defeat to them, and disappears. As the player looks around to where he went, Joe then reappears in front of the player, appearing to threaten them with one of his throwing knives. He then magically gives them a boss key before disappearing once again, but doubts the player's chances against Oxide, saying that they it will be their fault that their planet will be lost shall they lose to Oxide.