Cavern Catastrophe
Jungle Bungle is the first level in Crash Twinsanity and the first to take place on N. Sanity Island.

In this level, Crash must travel through the jungle while learning his moves via tutorials given by Cortex, who has disguised himself as Coco. The level contains enemies which are rarely seen anywhere else in the game, such as man-eating plants and crabs, and the skunk (which is exclusive to this level). Crash will start the level traveling down a basic dirt pathway with pits. He will then venture through a cave filled with glowing mushrooms, until he comes out into a wide area featuring ponds, waterfalls, cliffs, and more. After that area, he will travel down another dirt path until they reach Cortex's boss fight at the end.

Yellow gem: Near the Bandicoot House, there is a spiky totem. Roll a bomb lying on the ground nearby into the totem's mouth to blow up a part of the statue, lowering it closer to the ground. Push a nearby hay bale on top of the totem's tongue and use it as a stepping stone to scale the statue and retrieve the gem. Alternatively, a barrel from the Bandicoot house's front yard can be used.

Clear gem: Once Cortex teaches Crash how to slide, instead of going forward, head left to find an area with a cannon and lots of spiky totems. Use the cannon to launch bombs into the totem's mouths, lowering them and removing the spikes on top, allowing them to be used as platforms. While bombs can be launched directly into some totems mouths with a body slam, others require Crash to jump on the button instead and roll the bomb to the totem, as they're too far away to launch the bomb directly into the mouth, and body slamming causes the bomb to detonate almost immediately after impact.

Purple gem: In the same area as the clear gem, head to the beach at the far side of the clearing. Follow the beach to the right and there will be a bouncy metal crate. Jump on it to acquire the gem.

Green gem: When Cortex teaches Crash how to body slam worms, instead of doing as he says immediately, use the worm in its default position to bounce up a pillar that is close to it. The green gem is resting on top of the pillar.

Blue gem: After using the first worm to start climbing the cliff, the gem is in clear view close to the second worm.

The first phase of the fight is against Cortex on his hoverboard. At first he throws bombs down at Crash which must be dodged. He then fires green lasers which must also be avoided. Finally, he fires a green plasma blast, which must be spun back to hit Cortex, knocking off of his hoverboard taking a hit point. He teleports back up to the platform, gets back on his board, and this repeats for three hit points - in the later two, the bombs destroy parts of the floor, leaving less room to stand.

In the Mecha-Bandicoot phase, Crash must run along the ring platform to avoid N. Gin's attacks. First, Mecha-Bandicoot fires missiles upwards, which fall down onto the platform and must be avoided. Then N. Gin uses the chainsaw arm, randomly grinding it against the platform. Finally, he uses a green plasma blast, launched from a blaster concealed in Mecha-Bandicoot's nose. This blast must be spun back to attack. Two blasts must be launched back to destroy the chainsaw, then two more to destroy the missile launcher, then three final blasts to destroy the plasma blaster itself. This defeats the boss, triggering the outro cutscene.

In the original game, Jungle Bungle would have not been the first level in the game. Instead, it would have been a flashback level, which would have explained what happened previously in the Crash Bandicoot series, including the part in Crash Bandicoot: Warped when Tiny Tiger fought Crash.

In a very early build from 2003 , the level had many differences from the final version:

According to an early photo, one part of the level would have had different items placements (namely the addition of a man-eating plant and a stack of crates).

In the demo version of the game, there are lots of different item placements, including a fallen over-log splitting N. Sanity Beach from the jungle. There is also the notable inclusion of an enemy never seen in the final game: a turtle that takes the place of the complaining skunk.

Originally, the level was going to split off into 2 routes at the point where you first meet the Greedy Worm. The right hand route would have taken you along the usual path, but where the waterfall is there was a hole in the ground that led you to an underground cave. This is where you would have encountered an area that became known as "The Bug Run" - a section of the level whereby Crash would run into the screen being chased by a horde of bugs.

To indicate the split in the level, 2 wall paintings were created. The one that points to the Greedy Worm jump is still in the game, the other one had a native being chased by many bugs and an arrow pointing to the opposite direction.

That section of the level existed at one point in an early 2004 build and the area itself was finished although it was very empty. The section was later removed because it was considered way too difficult and was moved to Cortex's section in Classroom Chaos. On July 26th 2018 YouTuber GameHut released a video showing the remains of the deleted section in the prototype.

Note: Gallery does not feature actual gameplay. Only the remains of the section are shown, excluding the bugs and correct camera angles. 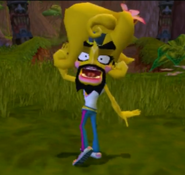 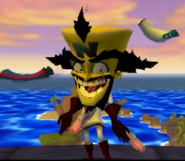 "Surprised to see me, Crash?!"

Concept art of some background elements 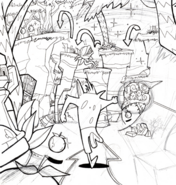 Concept art of an early version of the level