Not to be confused with the Steel Crate.

Iron Crates in most games are an indestructible type of crate. They are often used to form bridges or platforms for Crash Bandicoot to cross. They can be dangerous if bouncing on top of iron arrow crates, as Crash will be crushed if he is standing beneath one. Activatable iron crates, such as the ! crate, will turn into one once hit, as will Slot crates if they are not broken in time.

Iron crates are only destructible in Crash of the Titans and Crash: Mind Over Mutant, where they can be broken open by titans for mojo.

"Completely inert, can be used as a platform."

An Iron Crate from Crash Bandicoot.

An Iron Crate in Crash: Mind Over Mutant.

An Iron Crate from the Crash Bandicoot: N. Sane Trilogy.

An Iron Crate from the N. Sane Trilogy. 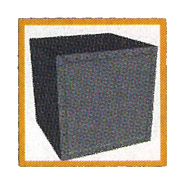