The Iron Arrow Crate functions identically to the regular arrow crate: it gives the player a boosted jump to top cliffs or reach crates and other prizes otherwise inaccessible. Like all iron crates, the iron arrow crate cannot be broken.

The purpose of the iron arrow crate is to prevent the player from hindering access to the level by destroying the arrow crate needed to proceed. It also serves as an alternative crate for secret levels and gem paths, allowing the player to obtain all of the crates in a level for a clear gem without having to access the paths and secret levels to smash crates.

An Iron Arrow Crate in Crash Bandicoot 2: Cortex Strikes Back. 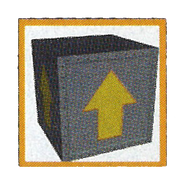 An Iron Arrow Crate in the Crash Bandicoot: On the Run!.