The Invisibility Crate is a rare crate only found in Crash Bandicoot: The Wrath of Cortex, specifically in the levels Fahrenheit Frenzy and Weathering Heights - the last levels in Warp Rooms three and four respectfully. The crate enables Crash to turn invisible for a few seconds aiding him in getting through obstacles such as lasers. It was also seen in the Game Boy Advance version of Crash of the Titans (which is renamed to Stealth Crate).

This is one of only two crate types to appear in Crash Bandicoot: The Wrath of Cortex without appearing in Crash Bandicoot: Warped, the other being the Coco crate. The Invisibility power-ups found in the racing games use the picture on the side of these crates as their icon. 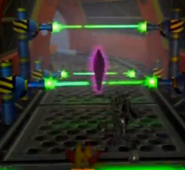 Crash invisible after breaking the crate.

A stealth crate
Add a photo to this gallery

Retrieved from "https://crashbandicoot.fandom.com/wiki/Invisibility_Crate?oldid=207277"
Community content is available under CC-BY-SA unless otherwise noted.