Single player
Interactive Pachislot Crash Bandicoot (also simply known as クラッシュ・バンディクー, lit. Crash Bandicoot) is an arcade game released exclusively in Japan. The game is primarily a slot machine, though its screen display allows for several other mini-games between spins. It is heavily based on Crash Bandicoot: The Wrath of Cortex, evident by its aesthetics, its choice of characters and the events that take place during mini-games.

Your classic slots machine, complete with a Crash Bandicoot skin. Little animations of Crash play on the top screen, showing him doing things like messing around in a warp room and being lowered into a claw machine filled with multi-coloured Wumpa Fruit. These animations will sometimes be replaced with other gamemodes, as seen below, while slot gameplay continues.

Crash is competing in a dance battle against Cortex. Press the three buttons on the cabinet in the correct order as indicated by Cortex to earn points. The final score at the end is presented by Coco.

This game is based on the level Tornado Alley. Pilot the Glider and shoot down Cortex's Tornado Generators by scoring high at the slots. The final score at the end is presented by Coco.

This gamemode consists of interactive pre-rendered cutscenes that pop up suddenly during slot gameplay. Help Crash escape Crunch (powered by Py-Ro or Lo-Lo) or Tiny with multiple-choice options that pop up at key points in the animation. At the end, Crash defeats the boss and recieves a Crystal. At the end of Py-Ro Crunch's animation, Fake Crash makes an appearance.

A photo of the game's cabinet.

An explanation of 3 Bonus System from Sammy's old website. 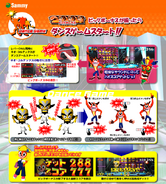 An explanation of Dance Game from Sammy's old website. 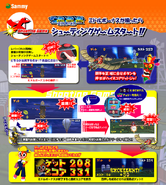 An explanation of Shooting Game from Sammy's old website. 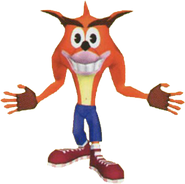 A promo render of Crash.