Hostile
Iguanas are lizard enemies that appear only in Crash Bandicoot and the N. Sane Trilogy remaster of the first game.

Iguanas look like green lizards with spikes running down their backs and a big white horn on the snout (a characteristic absent in the real-life animal). They have orange stripes on the back and a lighter shade of green in the lower sides of the body. The belly appears to be light green or yellow.

They simply walk back and forth not interacting with the player. They can be defeated by any attack, but not if hit with a spin attack in the part of the body where the horn is.

Concept art of the Iguana enemy by Charles Zembillas.

The mutant Iguana as he appears in the concept art for Crash Bandicoot by Charles Zembillas. 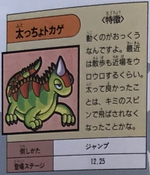 Retrieved from "https://crashbandicoot.fandom.com/wiki/Iguana?oldid=182981"
Community content is available under CC-BY-SA unless otherwise noted.