The Iceberg Lab is one of Cortex's bases which appears in Crash Twinsanity and is the second Hub World of the game.

The Iceberg Lab is a tall, imposing metal structure decorated with a large neon N insignia, built on a large iceberg. Large glowing cords and wires wrap around the building, and massive chains attach to wind turbines that presumably provide the lab with electricity. A platform rests on the ground near the front door, which rise up to carry Crash to the top levels of the lab after High Seas Hi-Jinks is completed.

Scattered around the base of the lab are several smaller islands and areas containing crate puzzles that give gems and extra lives as rewards.

A cave in the mountain, near the base of the lab, is the entrance to Ice Climb. Floating platforms lead from the exit of Ice Climb back into the lab, revealing a room containing Cortex's throne, monitors scattered around the walls and a large world map holograph projected below the ceiling. There are three doors around the back - two never open, but the middle one leads through to the room that contains the Psychetron, gateway to the Tenth Dimension. Another door to the back leads to a balcony where a floating platform that carries Crash to Slip Slide Icecapades can be found.

At the end of Slip Slide Icecapades, Crash is dropped on the other side of the mountain, where the remains of Dingodile's house can be seen. To the left of here is a tunnel that leads back to the lab proper, and to the right is Doctor N. Gin's Battleship, being the entrance to High Seas Hi-Jinks.

Cortex's airship is attached to a balcony on the Iceberg Lab, which can take Crash and Cortex to the Academy of Evil after High Seas Hi-Jinks is completed.

A boat can be found down by the water that takes Crash back to N. Sanity Island.

Blue gem: Across from the lab's front door is an ice bridge that leads to a smaller iceberg. Head off to the right, past the stacks of Nitros. and jump on the Bounce Crates over the edge of the cliff to activate the TNT crates at the end of the line of Nitros. Quickly jump back to solid land to avoid the explosion, and activate the Detonator Crate that drops down, releasing a bounce crate near the square of Nitros. Bounce on the bounce crate to jump to the clear area in the middle to retrieve the gem, and use the bounce crate inside to get back out.

Red gem: To the right side of the island that the blue gem was on, head down another ice bridge that leads to another, separate island. Activate the detonator to clear the bounce crates over the edge of Nitros, then bounce over on the bounce crates to get the gem.

Purple gem: Near the tunnel that leads to the battleship, to the left, are ascending bounce crates that lead to a small raised area. On the other side of this, over the edge, are steel crates that should be jumped along to reach the gem at the end.

Green gem: Between the purple gem's island and the lab, down a crevice in the ice, a platform of steel crates can be seen. Drop down there and safely land on the steel crates. Platform across the steel crate platforms to reach the gem, then come back the way you came.

Yellow gem: Near the entrance to Ice Climb, off to the right, cross an ice bridge to another island. Jump up the staircase of basic crates and land on the crate above the detonator at the top to bounce your way up to the gem. If you destroy all the crates, leaving you unable to get the gem, leave the Iceberg Lab and come back to reset them.

Clear gem: Near the short cut to the battleship, off to the right, a ! Crate can be found hidden in a nook under some ice. Activate it and rotate the camera to see floating steel crate platforms under the cliff edge. Drop down to a platform and jump along them to reach the gem, then come back the way you came.

A bird's-eye view of the Iceberg Lab

The interior of the Lab

A beta version of the Lab 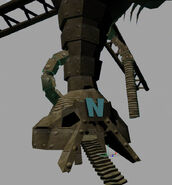 The making of the Lab

the machinery inside the iceberg

the cave above the hole

The lab visible in the background

Concept art of the lab