Crash: Mind Over Mutant
The Ice Prison (part of the Frozen Coast) is an icy area first featured in Mission 05 of Crash: Mind Over Mutant. Although the prison is located physically south of the Ratcicle Kingdom, it is accessed through a gate in the northeast corner of the village. Throughout the story mode, Crash visits the prison twice: once to free TK, and a second time to retrieve one of Uka Uka's bones.

In order to reach the Ice Prison, Crash must descend from the Ratcicle Kingdom at the peak, crossing geysers and climbing ice walls. At the bottom of the mountain is an arena where Crash encounters more titans. If this is his first time, these will be Ratcicles handling Magmadons trapped in ice, presumably to be delivered to the prison. Upon returning to face the Titan Heroes, these are replaced by Stenches and Battlers, who are keeping a lookout. Once defeated, a series of ice floes will carry Crash further towards the prison. Along the way, he is beset by mutants, Minebots, and Bratgirls (Slap-E if returning for the Titan Heroes). If Ratcicle is with him, he can take a shortcut through this area by surfing along warm currents. A tall bridge eventually leads to the Ice Prison's entrance.

The Ice Prison itself is a cavernous area with many natural and unnatural obstacles designed to keep prisoners from getting out (or Crash from getting in). Bratgirls/Slap-E lie in ambush near the entrance. If returning for the Heroes, Grimly will also appear. Strong winds blow across climbable ice walls; Crash may slip and fall into the abyss if not careful. The unfortunate prisoners can be seen, trapped and frozen, in the icy walls of the cavern as Crash progresses.

The cavern eventually diverges into two paths. The first path, to the north, leads to the core of the Ice Prison where TK is held. Crash must fight off Ratcicles and Bratgirls while freezing jets of water and hitting switches. Once freed, TK can use its telekinetic powers to move crystal platforms and TNT, opening up an escape route. From here, Crash can either turn left and circle around to the entrance, or turn right and leave the prison proper.

The final stretch of the level is teeming with Ratnicians and TNTs. Past a patchwork of sinking ice, there is a cliff face for Crash to climb, using TK to push and pull crystal platforms. At the top, TK can break an ice wall, at last arriving back in the Ratcicle Kingdom.

Within the ice prison, the second path, to the left, is blocked off at first. It is unlocked while Crash is searching for Uka Uka's bones later in the story. In this chamber, chunks of ice flow down a waterfall, and Grimly must slow time in order for Crash to cross them. The Magmadon Hero awaits further in. At this point in the story, Crash may also continue back into the prison core. Here, the Ratcicle Hero is entrapped in ice, guarded by Scorporilla and a team of NV-wearing Ratcicles. Defeating them frees the Ratcicle Hero, who can be jacked without fighting. 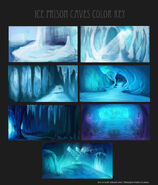 Surfing on a Ratcicle en route to the prison.

A climbable wall within the prison.