Ice Climb (サムサムアイスランド lit. Coldy Iceland in Japanese) is the fifth level in Crash Twinsanity and the first in the Iceberg Lab.

The first portion of the level involves Crash traversing through a hollow iceberg filled with machinery in a regular platforming segment.

The second section features both Crash and Cortex exploring the exterior of the Iceberg Lab. Crash must throw Cortex to trigger switches and pass through the level.

At the end of the level, Crash and Cortex fight Uka Uka as a boss after freeing him from some ice.

Water is extremely common in this level. Falling into it will instantly make the player lose a life.

Crash can die from falling from too high in most parts of the level.

Floating robots that follow Crash's movements with their cameras. They don't actively attack Crash, but will hurt or kill him if he touches one. These appear in Crash's section and the part when paired with Cortex. Being generic enemies they can be dealt with by any attack.

White-colored bats appear commonly throughout the level. When they see Crash, they will swoop down at him. They can be defeated with any attack, but it is interesting to note that when they are shot at by Cortex, the first one merely stuns them and makes them unable to fly, while the second shot kills them.

At the beginning of the level, there are several icebergs which serve as platforms. However, once you exit the cave with the icebergs and enter the inside of the mountain, the icebergs will sink slightly and will hurt Crash if he touches them.

Penguins appear frequently throughout this level with rockets strapped to their backs. When they see Crash, they will either rocket straight toward him or shoot up into the air and attempt to divebomb him.

Blue gem: The blue gem is on the ground level, at the beginning of the part where you climb the inside of the cavern as Crash. On the island where you encounter the first penguin, look to the left into the centre of the cavern. There is a small iceberg with the blue gem on it in jumping distance.

Green gem: After you go up the first lift and go around the first moving gear, there is a girder with a bouncy crate under an Aku Aku crate. Jump on the Aku Aku crate to break it and access the bouncy crate, which will bounce you up to the green gem.

Purple gem: Immediately after the second lift, you jump off onto a large square platform. Look left and the purple gem will be there on a smaller platform in jumping distance.

Red gem: Not long after you join back up with Cortex, you'll go over a large rotating gear. The red gem is in clear view off to the left. Simply double jump up and grab it or throw Cortex up there to get it.

Yellow gem: Not far after the red gem, there's a section where you throw Cortex over to a switch to extend a bridge over to let you pass. When the bridge extends on the normal path, another bridge also appears behind you. Take Cortex back to this bridge and throw him over to a platform with the gem on it.

Clear gem: Towards the end of the level, over a cliff face in clear view, there's a floating platform with a ! crate on it a small distance away. Throw Cortex over there to hit the ! box, triggering metal crates to appear that create a bridge over to the platform. Walk over the bridge and bounce on the bouncy crate to reach the clear gem.

During the boss Uka Uka walks around in his ice giant form. Crash must avoid his attacks and throw Cortex at one of three switches around the arena. When Cortex flicks a switch, a button appears in the centre of the arena that must be body-slammed. Body-slamming the button causes fire to shoot out of the ground around the button, damaging Uka Uka by one hit point. Uka Uka has three hit points in total.

Uka Uka has a few different attacks that he will do during the fight. In one he'll slam his foot against the ground, making a line of ice crystals pop out of the ground in a circle, hurting Crash on contact. Sometimes the ice crystals may track Crash rather than going in a perfect circle. In another attack, Uka Uka will form giant snowballs in his hands and throw them at Crash. 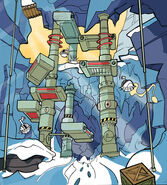 Concept art of the climbing segment of the level.
Add a photo to this gallery

Retrieved from "https://crashbandicoot.fandom.com/wiki/Ice_Climb?oldid=182430"
Community content is available under CC-BY-SA unless otherwise noted.