Electron Avenue
Hyper Spaceway is the thirteenth and last race track in Crash Nitro Kart and Emperor Velo XXVII's home track. It features only a relic race. To unlock it, the player must beat Geary and to race Velo the player must win all the boss keys. This track also appears in the Velo Cup.

It is the longest track in the game and one of the longest tracks in the Crash Bandicoot racing games. It is also one of the hardest tracks, partly due to there being no map shown when racing in it. Because of this, it can be quite challenging to find the shortcuts in this track as they are all well obscured.

The track returned in Crash Team Racing Nitro-Fueled with its track length shortened and with a proper map of the track itself added. The track is featured in the Space Cup. 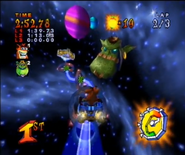