Hot Air Skyway is the fifteenth race course in Crash Team Racing and Crash Team Racing Nitro-Fueled. It is set in the sky with airships based on Cortex's Airship in the original Crash Bandicoot game. The pictures on them show that this is Pinstripe Potoroo's home track and also where he is faced in his boss race.

It is featured as the third race course in the Crash Cup (along with Polar Pass, N. Gin Labs and Slide Coliseum) and both the Yellow (as well as Dingo Canyon, Tiny Arena and Oxide Station) and Purple (as well as Roo's Tubes, Papu's Pyramid and Dragon Mines) Gem Cups. In adventure mode, it is in Citadel City, opposite from Oxide Station.

The course takes place on a floating patchwork track, suspended high in the clouds by many balloons and blimps featuring pictures of Pinstripe's face. In the Nitro-Fueled version, the track takes on a casino theme, with slot machines and playing cards serving as decorations. Many Fats and Slims, members of Pinstripe's mafia, can be seen around the track, spectating the race and launching confetti out of guns.

The track begins with a gentle turn to the left before curving upwards to the right, then turning left again before turning into a large downward spiral to the right, with one boost pad on the spiral along the way. At the end of the spiral is a large ramp with a boost pad on it, sending racers to the next section of track. This ramp grants blue fire in Nitro-Fueled. This track curves around to the right before a straight - alternatively, racers can go off to the right after the jump to an alternate path for a small shortcut.

Back on the straight, there's a small drop before curving around to the left, continuing straight ward for a short while before a u-turn to the left. The track gently angles to the left next before curving upwards to the right, with a boost pad on the right side of the road before a small ramp. There is a straight section here before a upwards curve to the left leading to a large boost pad ramp, dropping racers down to the next section of track below. After a brief uphill climb is a sharp u-turn to the left. Alternatively, with enough speed, the player can airbrake to the right at the top of the hill to cut the corner. There is a gentle turn to the right, then the course returns to the finish line. 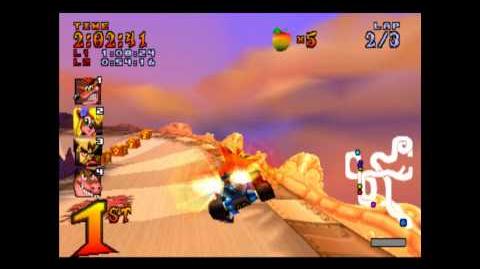 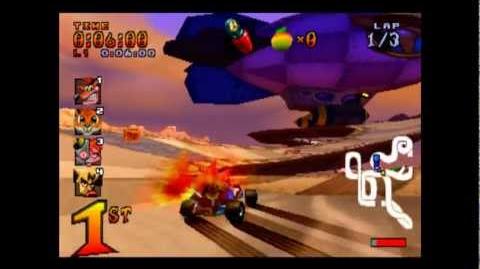 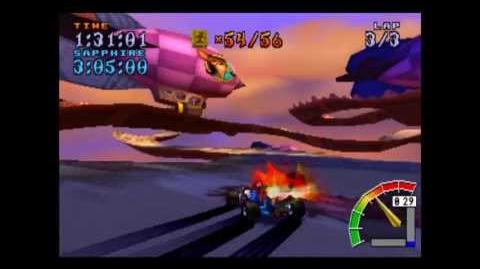