Failing a bonus path doesn't cost lives, so retry it!

Hang Eight is the third level of the first warp room in Crash Bandicoot 2: Cortex Strikes Back and the N. Sane Trilogy remake of the second game. It reprises the "stream" level archetype from the original Crash Bandicoot, where Crash must travel up a stream and avoid falling in the water. A new element is added to the level where Crash must ride around in a jet board and avoid hazards, which would include water mines, whirlpools, mechanical piranhas, man-eating plants, and falling in the water.

The level takes place in a river deep in the jungle. This and the levels Air Crash and Plant Food are based on the levels Upstream and Up the Creek from the first Crash Bandicoot game. Crash will be exploring a river filled with monstrous man-eating plants and piranhas jumping out of the water. The meandering path he traverses is made up of ancient tribal stones, suggesting that the path may have been created by a native tribe long ago. While progressing through the level, Crash must avoid jumping in the water as that will cost him a life. In addition, there will be moving platforms and hippos that require Crash to time his jumps. The hippos will not cause any damage to Crash, but they will immerse themselves in the water a few seconds after Crash jumps on their back, only to resurface a few seconds later.

The main feature in this level is the new jet board. Crash must ride the jet board over ramps and fences while avoiding a number of objects along the way. The main obstacle he must worry about are the water mines floating in the water. Crashing into one of these mines may cause him to lose his Aku Aku mask or even a life. He must also watch out for whirlpools lining the water, as they will suck him up if he is not careful with them. At one point in the level, if the player has the Blue Gem from Turtle Woods, he can take a secret path that contains more crates. The other clear gem is obtainable by activating the timer that automatically starts just before Crash makes it to the first jet, and reaching the end of the level before the time runs out without dying.

Start out this section by jumping between both sets of bounce boxes in order to break all four of them. Once you have done that, jump forward onto the next platforms and wait for the platform moving back and forth in the water to get close. Once it is, jump onto it and then jump onto the hippo on the left when you are close to it. Jump from the hippo onto the platforms and then jump up these platforms to the top of the waterfall. Follow the platforms, kill the plant and then break the big wall of boxes. Behind where the fall is you will see two boxes floating in the water. Jump onto both of them to cross the water and get onto some platforms. Past that you will see some boxes of Nitro and a checkpoint. Jump over the first row of Nitro and break open the checkpoint.

From here jump over the other row of Nitro and go forward, towards the pier. Jump onto the jetski and break as many of the boxes as you can. Past the boxes and ramps are two mines moving left and right in the water that you need to pass. Behind them there are some boxes of Nitro on the right and the ! Box on the left. Run into the ! Box to activate the outlined boxes you just passed. Go back and break all of them. Once you got those, come back to where the ! Box was and dock the jetski. Hit the Green ! Box and then jump on the blue gem platform to be taken back to the level. 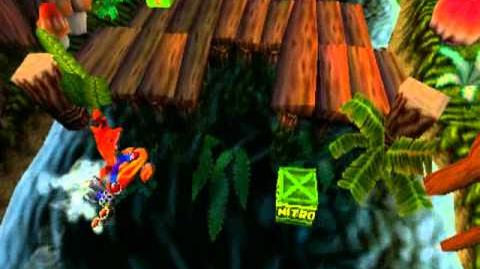 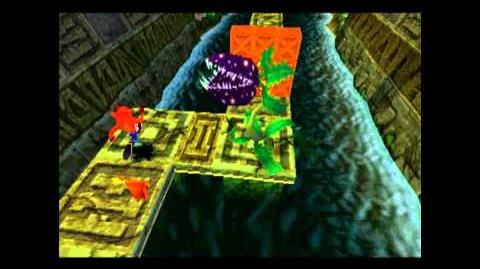 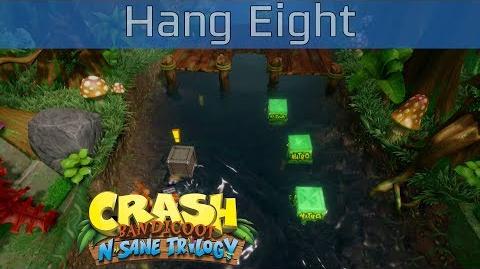 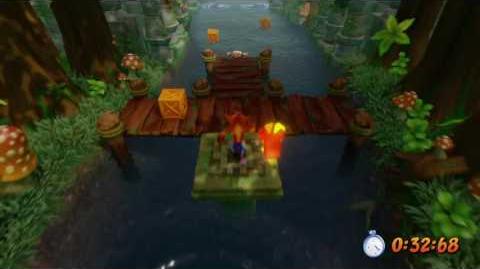