Start a Wiki
watch 02:17
The Loop (Games)
Do you like this video?
Grin and Bear It (わらって・こらえて lit. Laugh and Holding Back in Japanese) is the first level in Crash Bandicoot Purple: Ripto's Rampage and is unlocked after ten wumpa fruit are collected. This minigame is played much like the polar bear levels in previous Crash Bandicoot games, except this time in 2D. There is a clear gem in this minigame that is awarded when all of the crates are broken.

A little meter on the bottom of the screen will show how close the player is to the finish. Turbo needs to be used to get some of the crates in the level. If Crash touches an obstacle without a mask or falls down a pit, he will turn into a angel and fly out of the level while carrying Polar and lose some Wumpa Fruit. If Crash reaches the end, he will be teleported back to the actual area. 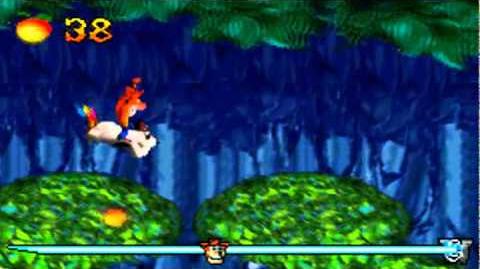 Retrieved from "https://crashbandicoot.fandom.com/wiki/Grin_and_Bear_It?oldid=119466"
Community content is available under CC-BY-SA unless otherwise noted.