The Gorillas are buff enemies with very large torsos and arms, but very short legs. Despite their name, they have dark blue fur with a lighter patch of fur on their shoulder and a small lock of hair on top of their heads. The face and torso has visibile dark-yellow skin.

Gorillas stand on a stone pillar and constantly throw logs in front of them that bounce over the other stone pillars in front of them. While it may not seem obvious, these logs can be spun away with proper timing. They receive their logs from a mysterious source in the darkness under them, probably another gorilla. They can be defeated by a spin attack, making them loose balance and fall backward in the dark under the platform they were previously standing on.

The gorillas act similar to Pinstripe's henchmen in the original Crash Bandicoot game, where they throw barrels towards Crash's direction in Toxic Waste. Crash must use the same method to defeat them as he did with the gorillas, in which he must dodge the barrels and spin the minions away when he gets close to them.

A Gorilla in Crash Bandicoot 2: Cortex Strikes Back.

The gorilla's model in Crash 2.

Concept art of the gorilla in "Crash Bandicoot: The Wrath of Cortex".

The Gorilla implemented into gameplay by fans in Crash Bandicoot: The Wrath of Cortex.

Coco trapped in the cage by the gorilla in Crash Bandicoot: The Wrath of Cortex. 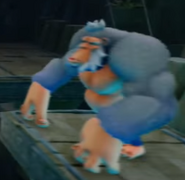 Retrieved from "https://crashbandicoot.fandom.com/wiki/Gorilla?oldid=181156"
Community content is available under CC-BY-SA unless otherwise noted.