Gone a Bit Coco is a cut level meant to have been in Crash Twinsanity. The level would have had Cortex in Coco's mind with cuddly enemies. Later, Nina would have went in to repair the damage Cortex did.[1] This level would have been set after High Seas Hi-Jinks. A glimpse of the level can be seen in an early gameplay video. The deleted scene of Cortex entering Coco's brain is seen in the video below. According to Rebecca Kneubuhl (one of the members of Spiralmouth), they definitely never made a Gone a Bit Coco theme, and had never seen its concept art before.

After Coco is zapped with the Psychetron, a portal opens up into her Brainovial Hyperbarium and Cortex must retrieve important information that only she knows.[1]

The level would take place in a pink candy floss space on a floating island where towns adorned with hearts rest. In this level, both the sun and the moon are visible, and the starting point in the level is a sort of beach-like setting with palm trees. At the starting point, Cortex must cross over a bridge to enter the town, and his path would presumably carry through the large horseshoe and onwards. According to a segment of the level, Cortex might have to enter the very large windmill in the town. It is possible that the fences in the town would serve as barriers. Houses would range from small, two story tower-like houses to large, white, houses. From observation, a part of the level might have taken place on the large bridge at the edge of the town, which led up to the town's windmill. It is possible that the bridge would have had the Teddy Bears driving cars.

Teddy bears were a common enemy in this level and appeared with a variety of ways of trying to destroy Cortex, such as lollipop weapons or cars. When wielding lollipops, a charged blast from Cortex's gun would be able to disarm them and make them vulnerable to attacks from Cortex. These all can be seen in the concept art gallery.

Pink Elephants were to appear in this level. They would wear a captain's hat. The elephants will reappear in Crash Bandicoot: On the Run!.

A finished segment of the level 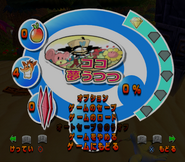 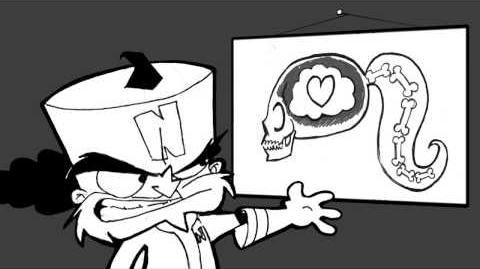 Deleted Scene from Crash Twinsanity No.6-0

The Teddy Bear enemy in a car

An "in-development" screenshot of the level

Screenshot of the level

Another screenshot of the level 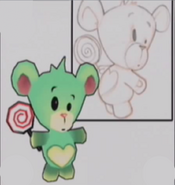 A Teddy Bear enemy intended to be in the level 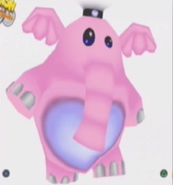 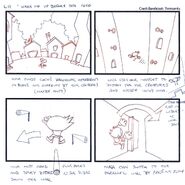 Concept art of Nina's section of the level.
Add a photo to this gallery