Swinging a club (turkey in the remake)

They wield dual clubs which they constantly swing to hit Crash or Coco. In order to defeat them, they must jump on their heads, knocking them to the ground. When defeated, their belly can be used like a trampoline. If they get hit by one of the clubs it is swinging, they will smack against the camera and lose a life.

A Giant Lab Assistant in Warped 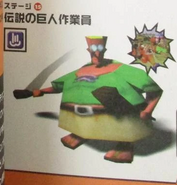 Retrieved from "https://crashbandicoot.fandom.com/wiki/Giant_Lab_Assistant?oldid=194282"
Community content is available under CC-BY-SA unless otherwise noted.