In Crash Bandicoot, gem paths are used to pick up crates in specific levels, which are a necessity to acquire the level's gem. A single colored gem can unlock multiple routes. For example, after obtaining the red gem from Slippery Climb, the player has access to the gem paths found on Native Fortress and Road to Nowhere. Taking these gem paths allow the player to break the crates in areas formerly inaccessible in the level, leading to the player obtaining the clear gem in that level. Both of these levels are originally found before Slippery Climb and so the clear gem on these two levels were unavailable at first. This game also exclusively features the clear gem path in the 'castoff' level, The Great Hall. If the player obtains all of the clear gems in the game (which also requires every colored gem), the entire path is complete, allowing the player to access the 100% complete ending.

Unlike in future titles, many of the gem paths in the original game do not pose a challenge to the player and simply lead to extra crates, for example in Rolling Stones and Lights Out.  However, those seen in levels such as The Great Gate and Cortex Power are longer and contain hazards, which have since become a staple of alternate routes in the series.

Castle Machinery has a different type of gem path. The green gem opens up a path at the beginning of that level, which allows the player to skip right to the end of the level, picking up 27 lives on the way.  This path is not required for box completion, and in fact, the player will have to play through the level the normal way to collect the level's gem.

The gem platforms are smaller and rapidly rotate when the appropriate gem isn't collected and shrink further when the player gets close, but stay enlarged and rotate much slower when solid.

Levels whose gem paths can't be accessed the first time you enter this level through normal gameplay are listed in bold, the same holds for other games.

*In the Japanese version, this level's gem path can be accessible the first time you enter. 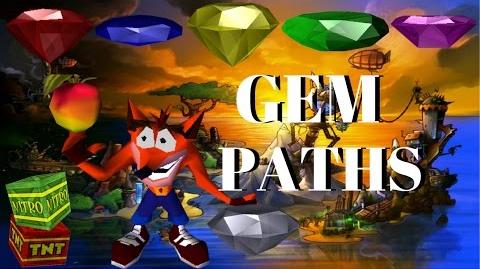 In Crash Bandicoot 2: Cortex Strikes Back, unusable gem paths are not defined by the trails of small gems, but rather by a skeleton of a large, flat, platform gem of the appropriate color. When the player obtains the appropriate gem, the platform solidifies and rotates, and the player is able to jump on the platform, which will carry them away to the gem path in another part of the level, rather than contained inside the same path like in Crash Bandicoot. But the idea of multiple gem paths unlocked by one colored gem was kept in this game. For example, the red gem will unlock the gem path in Snow Biz, and a portion of the multicolor gem path in Spaced Out, which requires all of the colored gems to complete. This game also keeps the function of the gem paths of obtaining the rest of the crates for a single level, although the gem paths which contain no crates instead have a clear gem as a reward. This is the only game that does not have an individual gem path for the purple gem, and also the only game that all gem paths can be accessed the first time a level is entered.

When in outline form, the platform does not rotate, but it spins at a moderate speed when available.

Crash Bandicoot 3: Warped follows the exact same rules as Crash Bandicoot 2: Cortex Strikes Back. All colored gems unlock a single gem path, and a portion of the multicolor gem path similar to the one found on the previous installment's Spaced Out, now found on the Egyptian themed Bug Lite level. Unlike Crash 2, all gem paths contain a clear gem regardless of there being crates in the route.

The paths that don't contain any crates will take Crash back to the Warp Room, the ones which do will return him back to the main path. Of these, backtracking will be required on Tomb Time and Dino Might! to break any missed crates. Gone Tomorrow will take Crash back to first segment of the level to break the crates activated by the ! Crate on the gem path. Additionally Dino Might!'s gem path also contains the entrance to the secret level Eggipus Rex.

The platform spinning works exactly as it does in the prequel. The gem path in Tomb Time, however, is not accessed via a platform, but rather a split path, where the left path has a door that opens when Crash has obtained the purple gem. It's possible to enter this path from the back side, without the purple gem, if the player has the death tornado spin, though this is easier to do with the gem, as the platforms leading back to the main path only appear if Crash has it. 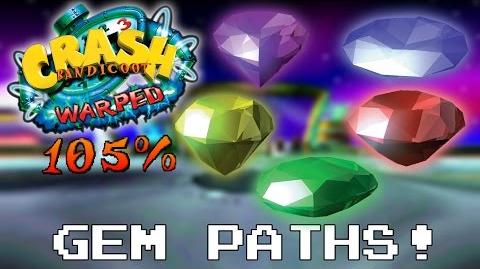 In Crash Bandicoot: The Wrath of Cortex, the concept of a multicolor gem path from the two previous installment's on the levels Spaced Out and Bug Lite is scrapped, and the colored gems will only unlock one gem path per gem. The platform design changes in this game also. The platform is similar to the ones in the original Crash Bandicoot game, being large gems rather than a rimmed jewel as they were in Cortex Strikes Back and Warped. Sometimes, the gem path blends into the level, like it does in Compactor Reactor, and is simply a fence with the emblem of a colored gem.

Although the red, blue and purple gem paths do contain regular crates, they are in close proximity to Nitro Crates and so are opened when the Nitro Switch Crate is activated on the main path, meaning the gem path is not required to obtain the level's box gem.

All gem paths in this game have an alternate exit, Banzai Bonsai also contains the Super Charged Body Slam power-up on its path. 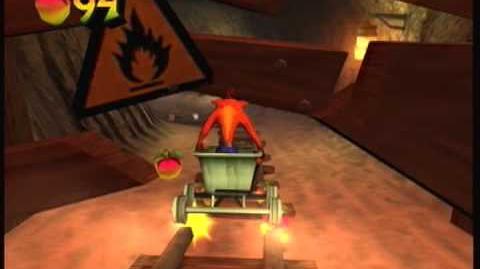 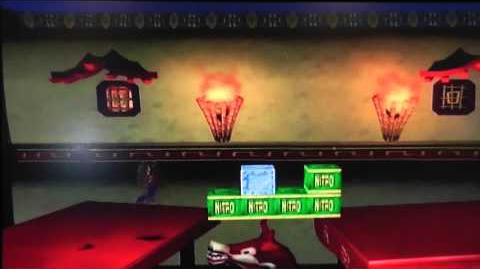 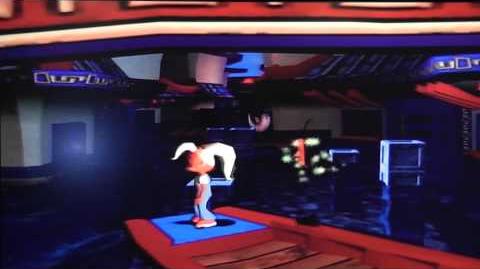 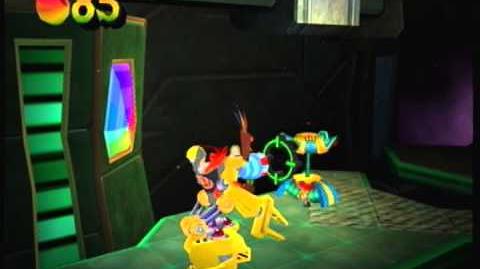 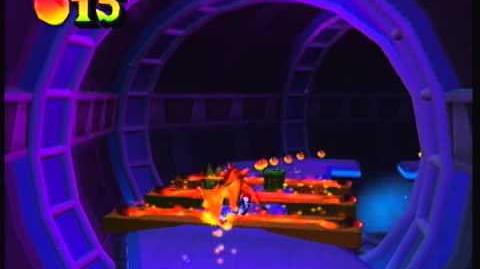 Like in Crash Bandicoot: The Wrath of Cortex, the colored gems only unlock one path per gem. Like Crash 2 and Crash 3, the platform is a colored outline until Crash retrieves the gem. Like the bonus and ending platforms, when Crash steps on a colored gem platform, he will be teleported to the gem path. There is no purple gem in this game, but the other original colors are kept.

None of the Gem Paths in this game has an alternate exit. 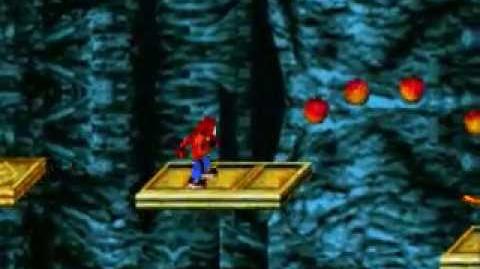 The clear, blue, green, purple, red, and yellow gem paths reappear in the N. Sane Trilogy remasters of the first three games where they reprise the same roles they had in the original versions of those games. The orange gem path reappears in the N. Sane Trilogy remaster of the first game, where it reprises the same role it had in the original version of that game. 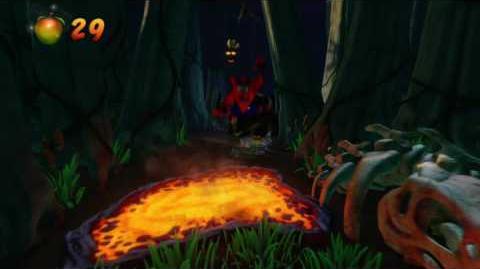 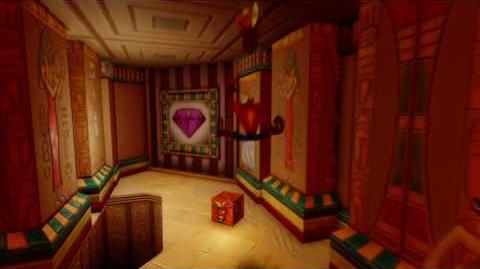 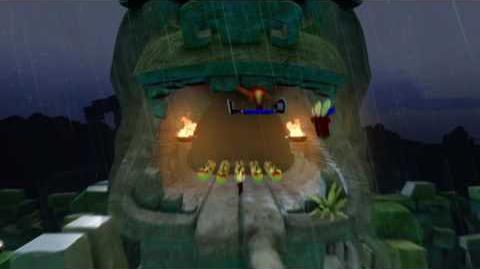 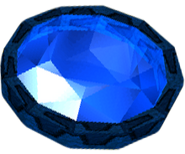 A Blue Gem Path in Crash Bandicoot 2: Cortex Strikes Back.

A Green Gem Path in Cortex Strikes Back.

A Purple Gem Path in Cortex Strikes Back.

A Red Gem Path in Cortex Strikes Back.

A Yellow Gem Path in Cortex Strikes Back.

A Blue Gem Path in the Crash Bandicoot: The Wrath of Cortex. 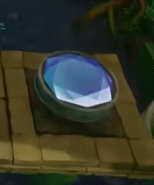 A Blue Gem Path in the N. Sane Trilogy. 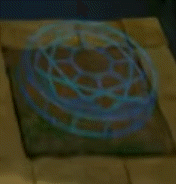 A Blue Gem Path Outline in the N. Sane Trilogy.

A Blue Gem Path in the N. Sane Trilogy.

A Green Gem Path in the N. Sane Trilogy.

A Purple Gem Path in the N. Sane Trilogy.

A Red Gem Path in the N. Sane Trilogy.

A Yellow Gem Path in the N. Sane Trilogy. 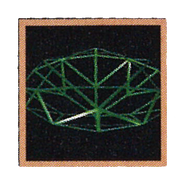 Retrieved from "https://crashbandicoot.fandom.com/wiki/Gem_path?oldid=189049"
Community content is available under CC-BY-SA unless otherwise noted.