The planet is dark, green, misty and surrounded by a poisonous atmosphere, small asteroids and a single dark green moon. Not much is known about the planet itself, other than that there are two chains of fast-food restaurant - Toxic Burger and Nuclear Pizza. Only three locations have been seen in the series: a dark, moggy refinery city, a futuristic carnival-like city, and a huge barrier reef on land. In Drive-Thru Danger, the lights of civilization can be seen underneath the track from the upper atmosphere. During the Gasmoxia Grand Prix of Crash Team Racing Nitro-Fueled, a race track was constructed high above the planet's atmosphere.

Aside from Oxide, the only other known residents are his henchmen, Zem and Zam, though they are of different species; the former being a troll like creature and the latter resembling a dinosaur. However, as shown in Crash Team Racing Nitro-Fueled, there are other inhabitants that both work for and attend the planet's fast-food outlets. There are also alien birds seen. 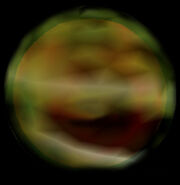 A view of Gasmoxia from Nitros Oxide's ship in Nitro-Fueled.

Toxic Burger, a restaurant in the upper atmospheres on Gasmoxia.