The Fruit Bazooka is a weapon that fires Wumpa Fruit that can be obtained by beating N. Gin in Crash Bandicoot: Warped or by beating Lo-Lo and Crunch in Crash Bandicoot: The Wrath of Cortex. In Warped, to use it, the player must hold down the L2 button, use the analog stick or directional buttons to aim, then press

to shoot. The bazooka has unlimited ammo and doesn't deplete the player's Wumpa Fruit count, so it can be used as much as the player wishes. It should be noted that Crash (or Coco in the N. Sane Trilogy remake of Warped) cannot move when using the bazooka, so some moving enemies can harm them if not defeated quickly enough. Releasing the L2 button will put the bazooka away so they can move again.

In the PS2 version of The Wrath of Cortex, however, L1 must be held instead, as the developers chose to use L2 for the tip toe. In the GameCube version, the player must hold down the L button, use the control pad or control stick to aim, then press the X button to shoot. The bazooka can also destroy nitro crates, which is required for Gone Tomorrow and Flaming Passion's box gems. In Warped, it cannot destroy checkpoint crates. This was done to ensure that the player can't skip a part of the level by hitting a checkpoint in the distance and then dying to move ahead. However, in The Wrath of Cortex, it can destroy checkpoint crates.

In Crash Bandicoot Purple: Ripto's Rampage, a sprite of Crash using the bazooka appears as a Trading Card.

In Skylanders: Imaginators, the Bazooka appears as Crash's Soul Gem Ability. Once unlocked, Crash's tertiary attack, Crate Going, will occasionally spawn a Rocket Crate that will drop a Bazooka when broken. Collecting this Bazooka will initiate the Box O' Rockets attack, where Crash dons his jetpack from Crash Bandicoot 2: Cortex Strikes Back, hovers in place and fires the Bazooka at whatever the player desires. The attack wears off after a few seconds. 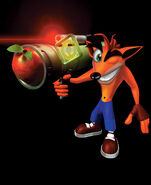 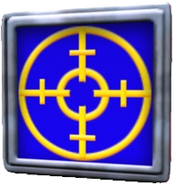 Fruit Bazooka power-up in The Wrath of Cortex 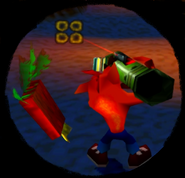 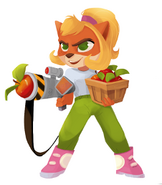