This arena has a similar appearance to Meteor Gorge because of the snowy area and the red cave in the middle. The blades from Deep Sea Driving are also present. They guard all four entrances to the cave. Additionally, the arena has an upper area with little shelters. It is located next to Meteor Gorge in the snowy mountains of Barin. Even the music here is the same as the one used for Meteor Gorge. The shape and overall design of this arena is fairly reminiscent of The North Bowl, though much larger and more hazardous. 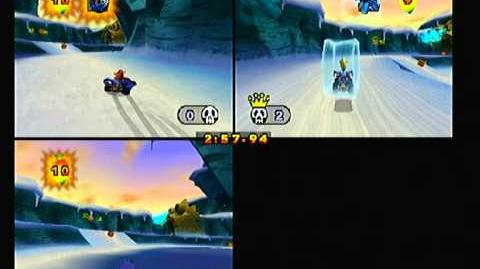 Crash Nitro Kart Multiplayer - Frozen Frenzy Battle
Add a photo to this gallery
Expansion required
This article is too short to provide more than rudimentary information about the subject. You can help the Crash Bandicoot Wiki by expanding it.
Retrieved from "https://crashbandicoot.fandom.com/wiki/Frozen_Frenzy?oldid=173778"
Community content is available under CC-BY-SA unless otherwise noted.