In one of the concept art galleries, it is seen when Cortex, N. Brio and N. Gin try to escape away from Madame Amberly, Cortex bringing Victor and Moritz and next to N. Brio there is a FrogNstein, which it seems that he created it (because they both have bolts in their heads) or just they encountered one, however it will remain as a mystery. 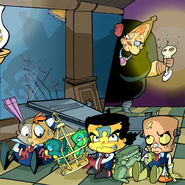 An illustration with a FrogNstein.
Add a photo to this gallery
Crash Twinsanity
Retrieved from "https://crashbandicoot.fandom.com/wiki/FrogNstein?oldid=218121"
Community content is available under CC-BY-SA unless otherwise noted.