They are primarily a green color. Frogs are seen in Toad Village, Gee Wiz, and Double Header. The frogs hop around the path that Crash travels, and attack him by hopping towards him. Crash can usually avoid the frogs by simply dodging them while encountering them. He can also defeat the frogs by jumping on them, spinning them away, slide dashing them away, body slamming them, or by using the Fruit Bazooka. If a frog attacks Crash and kills him, it will grant him a kiss, and afterwards it turns itself into a lab assistant that resembles a prince/king.

These enemies also appear in Crash Bandicoot: The Huge Adventure in Just Hangin' and Drip, Drip, Drip. With a slightly spottier and more orange coloration, these frogs hop back and forth rather than toward the player, poisoning Crash if they manage jump on him. The frogs in this game appear to be red eyed tree frog.

A giant mechanical frog appears as a background decoration in Crash Tag Team Racing on the Once Upon a Tire track. It wears a crown on its head, referencing the Frog Prince.

The frog makes a cameo appearance in Crash: Mind Over Mutant, where it is seen hopping around in the area with Crash and Coco's house and the Doominator ruins. It hops along the lake and can't be interacted with in any way, disappearing into the water when approached.

Additionally a frog appears in the opening cutscene when Aku Aku, Crash and Coco arrive at the Time Twister activating the time portal for Toad Village and being sucked into it.

A frog in Crash Bandicoot: Warped.

A frog in Warped.

A frog as seen in Toad Village in Warped. 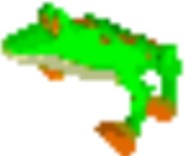 The frog in the Huge Adventure.

Concept art of the frog enemy in Warped.

A frog as it appears in the strategy guide of the Japanese version of Warped.

A frog was seen jumping in the water lake near Crash and Coco's house and the ruins of the Doominator in Crash: Mind Over Mutant.

A mechanical frog as it appears on the race track, Once Upon a Tire, in "Crash Tag Team Racing".

A puff of fairy tale magic from a frog's kiss in Toad Village.

A Japanese key chain depicting Crash attached to a frog.
Add a photo to this gallery