Fossil Fuel Injection is the seventh race course in Crash Tag Team Racing and is the first race track belonging to the hub called Tyrannosaurus Wrecks, the third portal in the game after Happily Ever Faster when you finish the three races and one stunt (Once Upon a Tire, Track and the Beanstalk, Evilocity and Hardly Ever Land) including the gem to the opening hub's doors so that you can tour it and play any of the portal's three races and one battle.

Fossil Fuel Injection is the seventh track in the game and the first in the portal which is set in the Mesozoic Era. It has two caveman targets, a dinosaur munching its food, fertilizers, stools, toy blocks, a dinosaur accessing a tunnel by poking its tongue out for the racers to get in and a few triceratops before the tunnel. 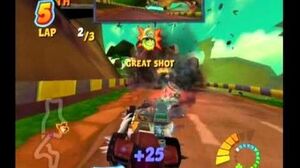