Biting
Fish are enemies in the original Crash Bandicoot game, Crash Bandicoot 2: Cortex Strikes Back, and their remastered versions in the N. Sane Trilogy. They are common in river-themed levels.

In Crash Bandicoot, fish are colorful and jump in and out of the river in an arc, damaging Crash when touched. They appear in Upstream and Up the Creek, and can be defeated by spinning.

Mechanical fish appear in Hang Eight, Air Crash and Plant Food. They behave the same as the fish from the previous game, and are defeated by spinning.

Fish appear in chapter 6: Enter! Danger Zone of Evil!. At the beginning of the chapter, Crash catches fish with a fishing rod and cooks them to eat. Later on, when Crash discovers the Jet Board and speeds through the water, he gets attacked by piranhas.

Fish that resemble koi appear in the level Banzai Bonsai, leaping straight up out of the water approximately every five seconds. They can be defeated by spinning.

A land-based variant resembling a salmon appears in the levels H2 Oh No and Tsunami. It simply flops in place on the ground and can be defeated with any attack.

Other fish enemies include the lionfish and anglerfish, which swim back and forth in underwater levels and can be defeated with any attack. The anglerfish appears in Sea Shell Shenanigans, while the lionfish is in H2 Oh No. Both are found in Coral Canyon.

Fish reprise their respective roles from the first two games in the N. Sane Trilogy. However, the Crash Bandicoot fish's design was altered: they are now red-colored and have sharp teeth.

A lone fish makes a cameo appearance in Crash Cove in Nitro-Fueled. This particular fish jumps.

Fish appear as common enemies in the Upstream level. They are seen jumping from either corner and flying towards the opposite side of the corner. 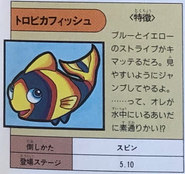 A mechanical fish in Crash Bandicoot 2: Cortex Strikes Back.

Salmon from The Wrath of Cortex.

A Flying Fish in Crash Bandicoot: On the Run!.