The Firefly is an aerial machine that Crash used in Crash Bandicoot: The Wrath of Cortex. It was first seen in the level That Sinking Feeling where players had to destroy six ships using the machine. It gets its name from its bug-like design. It's also capable of shooting homing missiles. 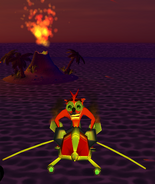 Crash rides the Firefly into the level.
Add a photo to this gallery
Retrieved from "https://crashbandicoot.fandom.com/wiki/Firefly_(Machine)?oldid=182695"
Community content is available under CC-BY-SA unless otherwise noted.