Wumpa Islands
Terra
Fire-Breathing Tikis are hazards seen several times in the Crash games, but play a role in three of the racing games.

The tikis appear as generic hazards in the ruins levels, where they will constantly breathe fire and stop for several seconds. They also can be found in twos, swiveling around while breathing fire. They seem to take on the appearance of gorilla heads.

The tikis appear only on the track Tiger Temple, where they appear inside ruins, and breathe fire that causes racers to spin out and drive slowly for a few seconds.

Tikis appear again in the track Tiny Temple, where they are also found inside a ruin room. The room they appear in contains a split in the track, with the tikis alternatingly breathing fire on one of the two routes at a time.

The tikis appear in Wumpa Jungle. One also appears on a trading card.

Fire-breathing tikis reprise their roles from Crash Team Racing and Crash Nitro Kart in this game.

A fire-breathing tiki in Cortex Strikes Back. 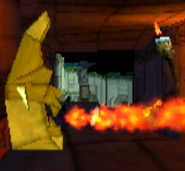 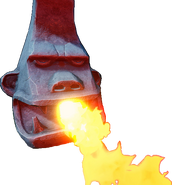