watch 02:45
Wiki Targeted (Games)
Do you like this video?
Play Sound

Throws solid or bouncy toxic waste barrels on Crash's route
Fat are potoroos that work for Pinstripe Potoroo.[1] Their only appearances are in Crash Bandicoot, the N. Sane Trilogy remake of the first game, and the Nitro-Fueled remake of Crash Team Racing, in the level Toxic Waste and racetracks Sewer Speedway and Hot Air Skyway.

They appear as the only enemies of Toxic Waste. Their attack is to throw toxic waste barrels at Crash. Once thrown, the barrels roll down the main path. Whenever he throws a barrel, the potoroo lets out an evil chuckle. They can throw yellow regular barrels or bouncing toxic barrels, which are also seen in Crash Bandicoot 2: Cortex Strikes Back and Crash Team Racing. The jumping toxic barrels are harder to dodge, so the player will have to time their movements carefully. When Crash gets close enough, he can defeat the henchman with a spin attack.

Similar to Pinstripe and the Slim, the Fat are dressed like the gangsters of the 1930's and 1960's, complete with a fancy black mobster jacket, pink shirt, white tie and fedora hat. They are also the more overweight enemies. 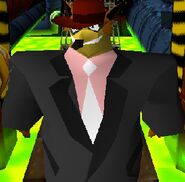 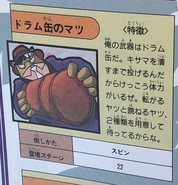 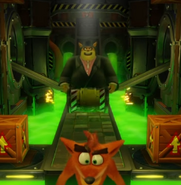 A Fat in the N. Sane Trilogy. 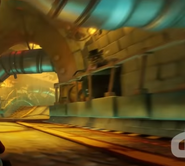 A Fat on Sewer Speedway in Crash Team Racing Nitro-Fueled.

A Fat above the finish line on Hot Air Skyway in Crash Team Racing Nitro-Fueled. 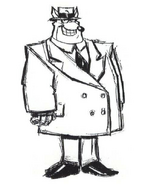 Concept art of a Fat.
Add a photo to this gallery