Oh, Crash. The farmer's market is tomorrow and my wumpa trees won't grow for my orchard is riddled with greedy worms. If you rid my land of these pests, I'll give you this Power Crystal.

Farmer Ernest is a dark blue emu farmer who grows wumpa trees, raises his own chickens, and participates in farmer's markets. He lives in a small farmhouse behind the skull rock on N. Sanity Island. He appears to know and trust Crash Bandicoot.

Ernest's only appearance was on Crash Twinsanity, in which he asks Crash to get rid of a swarm of worms in his orchard. The player must use Cortex as an hammer to smash the worms in the time limit and let the Wumpa trees grow.

The farmer promises Crash a power crystal if he accomplishes the deed, however, he is immediately paralyzed by Doctor Neo Cortex, who takes the power crystal anyway.

Farmer Ernest is voiced by Alex Fernandez (who also voiced Uka Uka) in the English version of Crash Twinsanity and by Haruo Satō in the Japanese version. 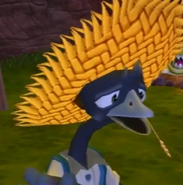 Concept art of Ernest.
Add a photo to this gallery

Retrieved from "https://crashbandicoot.fandom.com/wiki/Farmer_Ernest?oldid=182573"
Community content is available under CC-BY-SA unless otherwise noted.