Oh, Crash. The farmer's market is tomorrow and my wumpa trees won't grow, for my orchard is riddled with greedy worms. If you rid my land of these pests, I'll give you this Power Crystal.

Farmer Ernest is an emu farmer who grows wumpa trees, raises his own chickens, and participates in farmer's markets. He lives in a small farmhouse behind the skull rock on N. Sanity Island.

Ernest's only appearance was Crash Twinsanity, in which he asks Crash to get rid of a swarm of worms in his orchard. The player must use Cortex as an hammer to smash 15 worms within the 40 second time limit to allow the Wumpa trees to grow.

Ernest promises Crash a power crystal if he accomplishes the deed, however, he is immediately paralyzed by Doctor Neo Cortex, who takes the power crystal anyway.

Given that all we see of Ernest is limited to one cutscene, next to nothing is known of his personality. We do know that he is a farmer who works hard to care for chickens and grow wumpa fruit, and asks for help when he needs it.

Ernest is a lanky, dark grey mutant emu. He has thin legs and arms, but somewhat of a pot-belly. He has heavy-lidded black eyes, a grey beak, and a feathery tail. He has wing arms, with his arms resembling wings but possessing feathery digits that can be used like fingers. He wears a large straw sun hat, a white button-up t-shirt, sky blue overalls with large red buttons, and brown boots with white laces.

He appears to know and trust Crash Bandicoot, recognising him and asking him for help when he approaches. Crash seems to be on friendly terms with Ernest, but he doesn't seem upset when Cortex shoots him. 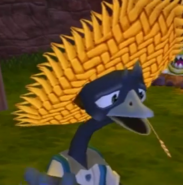