Bandipedia
Register
Don't have an account?
Sign In
Advertisement
in: Crash Bandicoot 4: It's About Time, Females, Neutral Characters,
and 7 more
English

We can stand here and talk 'til the cows turn blue. But let's fight instead!

Fake Coco is a character from the Crash Bandicoot series. As her name suggests, she is a doppelganger and arch-rival of Coco Bandicoot.

Fake Coco was introduced in order to fill the player 4 slot in the game's multiplayer mode (with the other characters being Crash, Coco and Fake Crash in that order). She is identical to the others in playstyle and her animations are based on Coco's. She also appears as an unlockable skin for Coco in the main adventure mode.

Fake Coco was added to On the Run! as a boss for Crash or Coco to defeat in the Season 2 update. Her attacks are mostly the same as Fake Crash's, throwing Boom Berries at the player character, firing rayguns at them and throwing serums to make toxic puddles on the ground. She can also sometimes deflect Boom Berries thrown by the player by spinning. Like all bosses, she is defeated by chasing her and throwing Boom Berries at her to reduce her health bar to zero, then using the Portal Weapons crafted beforehand to send her back to her own dimension.

Fake Coco is a deranged and hyperactive version of Coco, and is more goofy and light-hearted than her genuine counterpart, but lacks her intelligence. In On the Run! she shows an interest in making music, hitting her platform with giant drumsticks and her boss theme containing her singing.

Just like the original Coco, Fake Coco is a mutated bandicoot. Unlike Coco, however, she has thick eyebrows, big teeth, and dark roots in her blonde hair. She also wears a harness with a black belt, pouches and shoes, a white t-shirt with black sleeves and a black bracelet instead of pink.

Her appearance in Crash Bandicoot: On the Run! has been slightly altered. She now looks similar to the original Coco's On the Run! design, except she maintains the black, thick eyebrows and overgrown teeth and her dark roots in her hair were removed. She also wears lime green overalls, similar to her brother Fake Crash wearing green shorts.

"Whoever said “imitation is the sincerest form of flattery” never met Fake Coco. She’s a deranged, hyperactive copy of the real Coco who wants to see her archrival embarrassed and defeated." 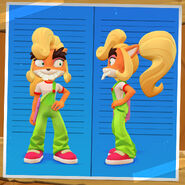 A promo image of Fake Coco for On the Run!.

Concept art of Fake Coco and Fake Crash for On the Run!. 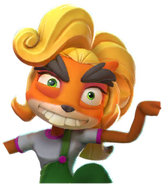 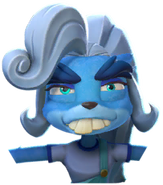 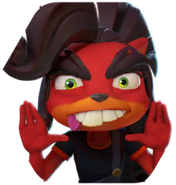 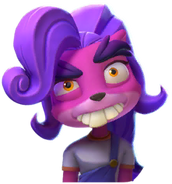 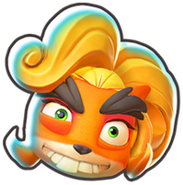 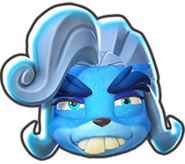 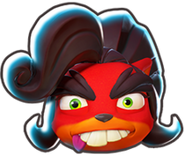 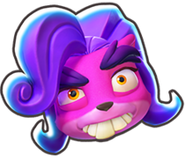 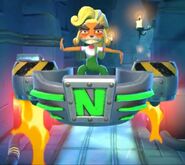 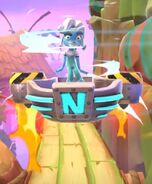