Fahrenheit Frenzy (やけどに きをつけろ！ lit. Beware of Burns! in Japanese) is the fifteenth level and is the last level of the third warp room in Crash Bandicoot: The Wrath of Cortex.

This level takes place in a lab inside a volcano (similar to how Compactor Reactor takes place inside a cave on a volcanic island). In the beginning, Crash Bandicoot uses his copter backpack to get through a cave to reach the lab. Inside it, there are rooms that can make Crash invisible and show his bones. This level also marks the debut of invisibility crates which turn Crash invisible for a few seconds when spun, causing him to be immune to lasers. 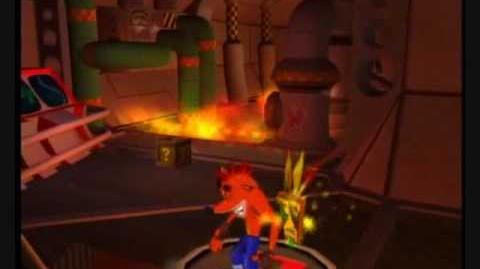 Crash Bandicoot The Wrath Of Cortex - 106% & All Platinums, Part 14 Fahrenheit Frenzy-0
Add a photo to this gallery

Retrieved from "https://crashbandicoot.fandom.com/wiki/Fahrenheit_Frenzy?oldid=198910"
Community content is available under CC-BY-SA unless otherwise noted.