The Evil Twins are fought right at the end of Crash Twinsanity as the final bosses of that game. In the boss fight they control the Deathbot. The boss is made up of three phases, in which the player must use Nina, Neo Cortex and Mecha-Bandicoot to destroy the Deathbot.

In the first phase the player must control Nina and destroy six blue glowing capsules, which are sitting on top of glass pillars around the arena. The capsules are in three sets of two, and Nina must use her bionic hands to grapple to the top of each pillar, where she can spin and destroy the capsules. Nina must also stay clear of the ants that the mech summons, as well as avoid the Deathbot's fire breath, claw and stomp attacks. Once all six capsules have been destroyed, the Deathbot will return to the center of the stage and phase two will commence.

In this phase the player controls Cortex, and must shoot at and destroy the Deathbot's two guns- its machine gun and its shock wave laser gun. The Deathbot will alternate between shooting each gun at you - the machine gun rapid fires bullets at you, while the laser cannon fires a blue laser which makes a shockwave that ripples outwards across the floor. Each gun has two hit points, and once both guns have been destroyed the final part of the boss fight will begin. 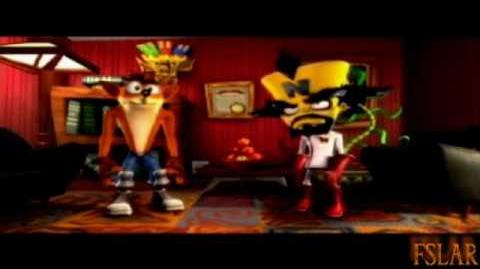 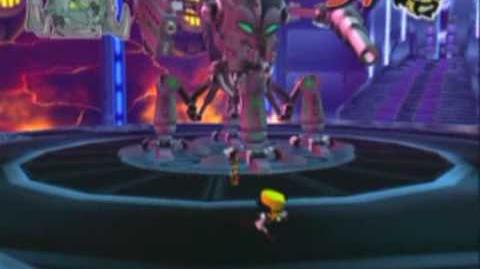 Nina's part of the fight

Cortex's part of the fight

Mecha Bandicoot's part of the fight 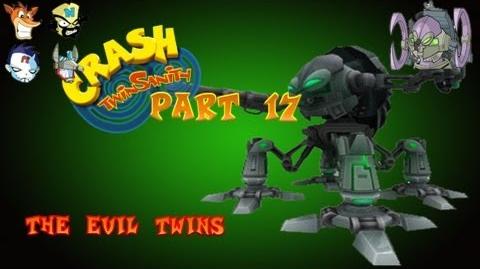 Crash Twinsanity 17 - Play Time Is Over
Add a photo to this gallery
Retrieved from "https://crashbandicoot.fandom.com/wiki/Evil_Twins_(Boss_Fight)?oldid=187382"
Community content is available under CC-BY-SA unless otherwise noted.