Bandipedia
Register
Don't have an account?
Sign In
Advertisement
in: Levels, Crash of the Titans, Episodes, Jungle Levels
English

Scandalous Snipe! Jack Snipe and destroy all bombs before time runs out!

A Succumbing to Age Story is the second episode in Crash of the Titans and the second one to take place on Wumpa Island. It mainly consists of jungles. The name of the episode comes from the term "a coming of age", which is a story archetype.

This relatively short episode begins with Crash encountering Goar for the first time in the forests of Wumpa Island. Its strength allows him to clear dried-out tree husks in his path, as well as to defeat Ratnicians and other hostile Goar. Afterwards, Snipe appears. Firing feather projectiles at targets looses tree trunks hanging from vines, creating a bridge to the cliffside. Crash can perform back flips and wall jumps to reach hidden collectibles here. A squadron of Ratnicians awaits him at the very end of the level. 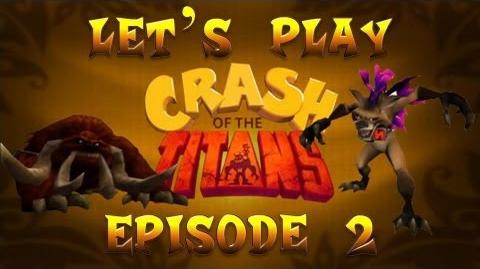 Fight against Goar and Ratnicians.

Destroying a target fixes the bridge.

Second hidden spybot at the back flip ridge. The gap at the bottom hides the doll.

Fight against Ratnicians by the level exit.

Crash of the Titans
Español
Community content is available under CC-BY-SA unless otherwise noted.
Advertisement