Bandipedia
Register
Don't have an account?
Sign In
Advertisement
in: Levels, Crash of the Titans, Episodes, Jungle Levels
English

Episode 1: A New Hop is the first episode in Crash of the Titans, as well as the first one to take place on Wumpa Island.

The episode begins with the bandicoot family relaxing outside their home, when suddenly, Cortex arrives in his airship and captures Aku Aku and Coco. Though successful in knocking Aku Aku's cage free from the ship, Crash is unable to save Coco and only narrowly dodges Cortex's ice beam, which freezes Crunch instead.

Crash makes use of some basic moves in his skill set: jumping, punching, swinging on ropes, and the spin hover. He encounters Cortex's ineffectual minions, the Ratnicians, and must defeat them. Further in the forest, he finds and frees Aku Aku. They also find a Spike, an aggressive mutant creature unlike any they've ever seen before. Crash is able to jack the Spike and control its powers by stunning it and riding on its back. The episode ends with a fight against other, wild Spike.

Crash's friends are captured as Cortex charges his freeze ray.

Bouncing on a mushroom for the voodoo doll. The mojo room portal can be seen in the distance.

Bridge across the river.

Ratnicians try and fail to take Aku Aku away.

Spike versus Ratnicians. Uka Uka's barrier prevents progress until all enemies are defeated.

Final fight of the episode. 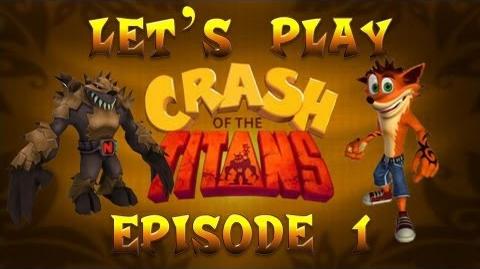 Crash of the Titans
Español Português
Community content is available under CC-BY-SA unless otherwise noted.
Advertisement