The Elementals are a group of evil mask spirits who have the power to manipulate the elements of earth, water, fire and air respectively. Previously, they had done massive damage to the world by causing various natural disasters. For this, they were sealed away by the Ancients. Once released by Uka Uka and Neo Cortex, their goal was to cause chaos across the world. They consist of four members: Rok-Ko, Wa-Wa, Py-Ro, and Lo-Lo.

Their first appearance is in The Wrath of Cortex, where they serve as four of the main antagonists. They first appear in the games intro upon being summoned by Uka Uka. When Aku Aku protests on account of how dangerous the elementals are, Py-Ro taunts him and orders the other elementals to fire beams of energy at him, which fails to harm him before he flees.

The elementals appear throughout the main game in turn, jeering and shouting at Crash, Coco and Aku Aku through the vortex. Each provides their powers to Crunch Bandicoot to fight Crash as the boss fight of each hub area in Coco's VR Hub System before being defeated by Crash one by one.

They appear one last time as part of the final boss against Crunch and Cortex, using their powers to serve as hazards to hinder Crash's progress. At the game's true end they vanish without a trace, sealed away once again with the power of the Crystals that Crash and Coco had collected.

Images of the Elementals carved into rocks and tree trunks appear as cameos in It's About Time, in the Eggipus Dimension levels Blast to the Past and Fossil Fueled.

The Elementals all appear in On the Run! as bosses for Crash or Coco to defeat.

What are you looking at, fuzzhead? I'm Rok-Ko, the Earth Elemental. Uka Uka and Doctor Cortex woke me from my captive slumber, and now, I'm free to pulverise whatever gets in my way! Ho-ho, don't even think about collecting those crystals, punk. 'Cause if you do, I'm gonna bury you alive!

Rok-Ko is the elemental mask of Earth, capable of controlling earthquakes and landslides among other earthly forces. When teamed up with Crunch, he causes rocks to fall from the sky and protects Crunch by creating a rock sphere around him.

He is something of a bully, often coming up with demeaning, yet juvenile nicknames for Crash. In the game's manual, he's described as "quick to anger with a head full of rocks".

Physically, Rok-Ko is a grey mask with a square jaw and pointed top. He has two bent extremities on either side of his head, resembling horns. He also has a jagged brown band around his forehead and three bumps on the very top of his head that resemble tufts of hair. He has triangular red eyes, a brown triangular nose and a mouth with jagged brown fangs. An odd symbol seems to be carved into his chin.

Crash Bandicoot! You got some nerve setting foot into my domain without an invitation! DON'T TALK BACK TO ME! I'LL FIX THAT ATTITUDE PROBLEM OF YOURS!

Wa-Wa is the elemental mask of Water. His powers include transforming Crunch's body into suspended water and creating balls of ice. He also bestows unto Crunch the ability to create energy waves.

Wa-Wa has a militaristic, aggressive personality, barking orders at Crash and taking offense without provocation. Apparently, his goal is "to flush the world clean and rebuild it as he remembers it".

He is a light blue, hourglass-shaped mask with small, circular markings which resemble bubbles. He has a large, flat nose, green eyes with a thin eyebrow ridge which curls at the ends, and a wide mouth with small fangs.

I realize my brethren have had some trouble with you, my little orange friend, but I'm not quite sure why. Huh... Is it getting hot in here? Is it safe to be wearing that fur?! IT LOOKS FLAMMABLE!

Py-Ro is the elemental mask of Fire, described as the strongest of the four. His power endows Crunch with a body made of molten rock and the ability to hurl flaming boulders with little effort.

Py-Ro acts quite level-headed and confident, cracking jokes while taunting Crash, though he is said to have a volcanic temper when perturbed.

He is a round, red-orange mask with curved shapes coming off of his face resembling flames. His eyes are a gradient of red to yellow, with a heavy eyebrow ridge and four pale yellow dots in a line across his forehead. He has a large, triangular nose with two white stripes on either side, and a mouth which is always scowling, baring many small, yellowed teeth.

The Crash Bandicoot, ay? Oh, I've heard so much about you and this is the hero I have to blow away? Ha! Seems like a bunch of hot air to me!

Lo-Lo is the elemental mask of Air and has dominion over the forces of wind. He grants Crunch a body with the ability to manipulate electricity at will, though using these powers makes him vulnerable to attack.

Lo-Lo has a somewhat effeminate personality, and is described as a "crazy joker". Like the other Elementals, he is quick to dismiss Crash at first.

Lo-Lo is a round, whitish-blue mask, with a small mouth and puffed-out cheeks. He has a small pointed nose and white, almond-shaped eyes. Curled shapes above his eyes and on top of his head give him an abstract resemblance to a cloud. A spiral symbol is carved into his forehead.

Aku Aku meets the Elementals at the Hyperspace Temple.

Rok-Ko and Py-Ro concept art in Crash Bandicoot: The Wrath of Cortex.

Japanese artwork of the Elementals.

Rok-Ko in The Wrath of Cortex.

Wa-Wa in The Wrath of Cortex.

Py-Ro in The Wrath of Cortex.

Lo-Lo in The Wrath of Cortex.

Japanese render of Lo-Lo
Add a photo to this gallery

Rok-Ko's cameo in Fossil Fueled in It's About Time.

Wa-Wa's cameo in Blast to the Past in It's About Time.

Py-Ro's cameo in Blast to the Past and It's About Time.

Lo-Lo's cameo in Blast to the Past and It's About Time.
Add a photo to this gallery 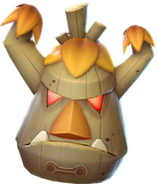 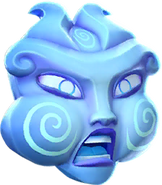 Lo-Lo in On the Run!.
Add a photo to this gallery
Crash Bandicoot: The Wrath of Cortex
Retrieved from "https://crashbandicoot.fandom.com/wiki/Elementals?oldid=221006"
Community content is available under CC-BY-SA unless otherwise noted.