Hyper Spaceway
Velo's Challenge (CNK GBA / N-Gage)
Electron Avenue is the twelfth Crash Nitro Kart race course, the last race track set on Teknee and the second longest track in the game. It is a super advanced city set at night, high in the sky. It has tall skyscrapers, futuristic flying vehicles, bright and colorful neon signs, lots of fast speedways and a few obstacles dotted along the track. It is used in the Nitro Cup and the Blue Gem Cup (along with Barin Ruins and Clockwork Wumpa).

This track returned in Crash Team Racing Nitro-Fueled with a new layout and Synthwave-inspired aesthetic. The track was later added to be part of the Space Cup.

The drop on this track is positioned right after the starting line. As soon as the player leaves the starting line, they will ascend a speed boost ramp, launching them into what seems to be a free-fall into a lighted tunnel. While in the air, the player has limited movement, only able to move from side to side with no clear indication of how far or little they have moved. Overall, the drop is utilized as a scenic fall on the track to give the player the opportunity to get a peaceful glimpse the futuristic city that encompasses Electron Avenue. Other than a lack of indication on sideways movement, the drop poses no real danger to the player and other racers.

Similarly to N. Gin Labs in Crash Team Racing, Electron Avenue features a tunnel boost, which is nothing more than a Speed Boost Patch that encompasses a long and narrow pathway. In the Electron Avenue race course, the Tunnel Boosts are immediately encountered after landing from the giant drop the player encounters at the beginning of the race. The tunnel boosts are arranged next to each other, with an occasional wall coming between them. Only one lane will be active at a time, something that can be controlled by breaking the ! Crate in between the two paths. They seem to represent either a futuristic walking sidewalk or assembly line. The tunnel boosts help the player by curving enough for a comfortable Turbo Slide out of the tunnel.

One unique feature to this track is a section containing alternate speed boost patches. The patches will alternate about every three seconds from the right side, to the middle of the track, and to the left side. Missing a Speed Boost Patch will not hurt the player in any way, but will give a big advantage to whoever can time driving onto the patches. The patches will only alternate in the given order. Once the patch reaches the left side of the track, the cycle will begin again with the patch on the right side of the track.

Like the electric fences in Crash Bandicoot 2: Cortex Strikes Back, these large fences will block the player's path for a short amount of time before opening up and closing once more. They take up the width of the track, so the player is unable to drive around the fences and is forced to take one of two paths: jump over the fence on a speed boost ramp, or drive through the open fence on a speed boost patch. The speed boost ramps lie on either side of the track and the patch lies in the center, giving the player little time to react to a change in the fence.

The track, like many other tracks in the game, utilizes the ability to drive at any angle, a key feature in Crash Nitro Kart. A large, electrically charged, purple track is the section in this track that forces the player to activate their anti-gravity feature in their karts. On this section of track, the player will find the alternating speed boost patches, along with a head spinning series of twists and turns before returning to the standard, yellow track. 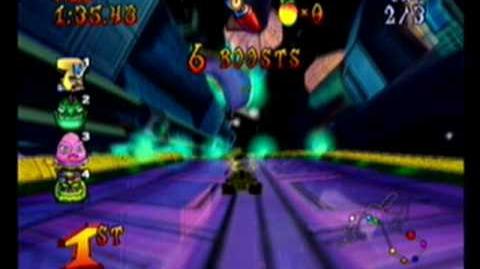 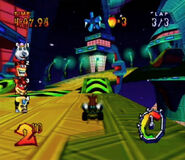 The giant drop at the beginning of the race

Coming up on the Electric Fence

Waiting Screen, showing Nitrous Oxide falling and about to get hit by three Red Eye Missiles 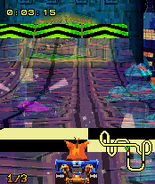 Electron Avenue in the N-Gage version of Crash Nitro Kart 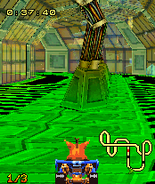 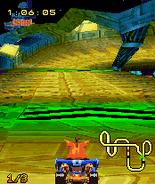 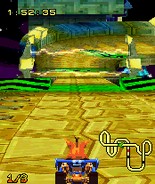 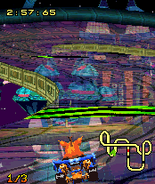 N. Gin and Dingodile racing in their Legendary Skins

Tiny and Crash in Electron Avenue