Start a Wiki
watch 01:50
The Loop (Games)
Do you like this video?
Split suggested
It has been suggested that this article should be split into two or more different articles.

Electric Lab Assistants (Japanese: ビリビリ研究員、発電人間ビリビリ宇宙研究員) are variants of lab assistants that appear in Crash Bandicoot, Crash Bandicoot 2: Cortex Strikes Back, and the N. Sane Trilogy. They will shock Crash if he runs into them while they are sparking.

Their only appearance is in The Lab. They appear on platforms with pits surrounding them and will run after Crash and attempt to electrocute him. When the lab assistants are not electrified, they can be spun back until they fall into the surrounding pit while screaming. Crash can also avoid them by jumping around them.

These lab assistants appear in Rock It and Pack Attack. Unlike the previous game, they now resemble a cyborg, and no longer approach the player. They must be spun into a fiery force field in order to continue, and will scream just as they did in the previous game.

Both types of electric lab assistants reprise their roles in the N. Sane Trilogy remasters of the first and second games, respectively. 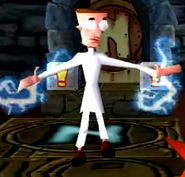 A Space Lab Assistant in Crash Bandicoot 2: Cortex Strikes Back. 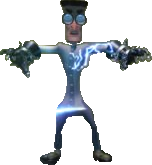 Crash and a Space Lab Assistant in the N. Sane Trilogy. 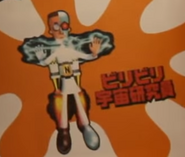 Add a photo to this gallery
Retrieved from "https://crashbandicoot.fandom.com/wiki/Electric_Lab_Assistant?oldid=198847"
Community content is available under CC-BY-SA unless otherwise noted.