But Krunk! They come from a planet just like yours. It's called... Earth!

Earth is the third planet in the solar system where is the main setting for the entire Crash Bandicoot series.

The planet is blue because of the oceans with several continents and islands that are scattered. The landscapes of this planet are: beaches, jungles, villages, forests, cities, volcanoes, mountains, glaciers and deserts. The atmosphere of the planet is blue with white clouds and has a unique moon in orbit.

Most of the time, the main events of this planet always pass in the Wumpa Islands where Crash and his gang live.

This planet is always the target of greed, for example: Uka Uka and Dr. Cortex, natives of this planet, always take on several evil schemes to try to conquer it.

But there are other intergalactic and interdimensional conquerors who tried to take it, for example: Nitros Oxide would transform it into a parking lot enslaving the inhabitants if he wins, Emperor Velo XXVII was going to destroy if the earthlings refused refuse to race on his galactic circuit, and the Evil Twins attempted to destroy Earth and leave behind the worst of the Tenth Dimension.

In Velo's galactic domain exists a planet which is a copy of Earth called Terra.

Earth as it appears in Cortex Strikes Back

Earth as it appears in Warped

Earth as it appears in CTR

Earth as it appears in Wrath of Cortex

Earth as it appears in the N. Sane Trilogy 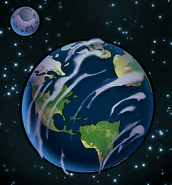 Earth as it appears in the official Crash Team Racing Nitro-Fueled comic
Add a photo to this gallery
Retrieved from "https://crashbandicoot.fandom.com/wiki/Earth?oldid=189038"
Community content is available under CC-BY-SA unless otherwise noted.